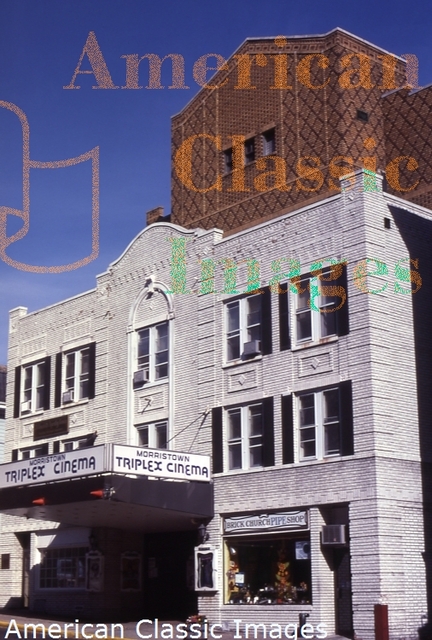 On December 1, 1978 it was twinned and by the end of 1978 a third screen had been added and it was renamed Morristown Triplex Cinema. It was finally closed and demolished with the opening of the nearby Headquarters ten-plex.

The Jersey sat vacant for many years. As kids in the 1950s, we used to prowl around the huge, dark theater, half scared to death. One time we met a derelict inside, but he didn’t harm us in any way and seemed to enjoy having some company.

The Jersey Theater was another victim of multiplex fever. The grand old theater was done an injustice when it was rebuilt as a triplex. As I recall one of its auditoriums had seats (possibly built over the cinema’s old balcony) situated on such a steep grade that you felt as if you were going to fall forward. You actually looked slightly downward toward the screen.

Unfortunately I do not recall ever seeing a production at the Jersey Theater before it was rebuilt as a multiplex cinema. Some of the films I saw there were THE ELEPHANT MAN, TERROR TRAIN and RAIDERS OF THE LOST ARK. The last movie I enjoyed at the Jersey in the summer of 1982 was STAR TREK II.

Jumping ahead from summer 1982 to spring 1994. My minivan was at the Chrysler dealership for some warranty related work. The dealership was a few blocks down the road from Jersey Theater on South Street. Even though I had an appointment and the auto repair should have only taken an hour or so I quickly discerned that the cigar chomping shop manager was not going to grant my minivan priority treatment. Stranded in Morristown I wandered toward the Morristown Green (town square) and figured I would check out what was playing at the Jersey Theater. I was hoping that there might be a matinee.

Standing in front of the theater I noted that it had obviously been closed for some time. I later blundered into the Headquarters Mall and its cinemas, but by then my car was ready for pick up. Good-bye Jersey Theater.

Work as a part time manager for Wood Theaters. They owned theaters in Madison and some other towns. worked there while working at Bell Labs in Whippany. Also worked at AMC Rockaway Inside/Outside Cinemas.

Historic references to the Jersey Theatre are few, but I found a few that reveal that the house was operating as a legitimate theater during at least part of 1946. An item in a 1946 issue of Fire Engineering mentions an incident in which a production of W. Somerset Maugham’s play The Circle was interrupted when a faulty sprinkler system soaked the cast on stage and in the dressing rooms.

A June 8, 1946, item in The Billboard said that a production of Androcles and the Lion had abruptly been canceled and the house closed on May 18, leading to a fracas with Actor’s Equity about unpaid wages.

The September 30, 1926, issue of The Film Daily lists among theaters planned or under construction a house called the Jersey in Morristown which was expected to open in early October.

I remember years ago going to an area theater where they put a dividing wall down the middle to create two theaters. Me thinks it was the Jersey Theater. The seats toward the inner side of either theater ended up facing a corner of the dividing wall, and you had to turn your neck somewhat to view the movie. I do now remember the 3rd theater which was origionaly the balcony. It was steep, wide, and not very deep.

I can’t be certain, but I am ALMOST 100% sure that my wife and I saw the 1985 version of Godzilla at the Morristown Triplex (well, that’s what we always called it). So I can say that it was most likely still in operation in 1985. I used to save movie ticked stubs, but can’t remember where I used to stash them – if I can find the Godzilla stub I’ll know for sure.

I saw the very strange Eraserhead here in the late 1970’s. I seem to recall that the theater had two balconies, one over the other, the top one being very steep. Not a very good environment for someone with a problem with heights.