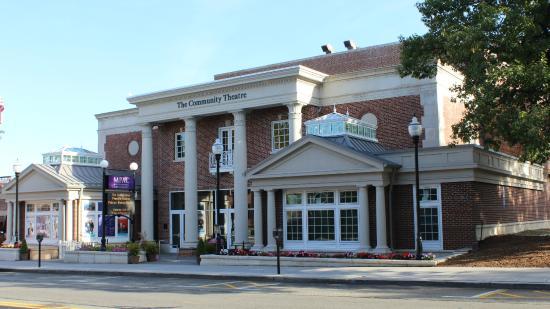 The Community Theatre was opened by Walter Reade on December 23, 1937 with the Carole Lombard, Frederic March comedy “Nothing Sacred”. The 40-foot tall building, fronted by four white Corinthian pillars in a Greco-Roman style, was built to show movies though, for a time in the late-1940’s, it also hosted big band performances. Operated by the Walter Reade organization until being sold in 1974, it went through several owners before going dark in the 1980’s.

When, in February of 1994, the conductor of St. Petersburg’s Kirov Orchestra visited the facility, he was witness to a dilapidated building in which the lobby ceiling had collapsed, there were broken seats sitting in piles, and mushrooms were growing in the balcony. However, after stepping foot on the stage and clapping his hands to test the acoustics, conductor Valery Gergiev agreed to have the Orchestra perform in the theatre as part of the Morris International Festival of the Arts, which had a short-term, rent-free lease on the space. Between that visit and the musical performance on September 29, 1994, nearly 300 volunteers scraped, cleaned, and painted the theatre in preparation.

In 1995, the South Street Theater Company was formed by Don Jay Smith and Lisa Smith, one of four couples who had speared-headed the volunteer effort. The organization purchased the theatre for $1.2 million in that year (after the previous owner had paid $2 million just eight years earlier). In the years since, the theatre, with its 1203 plum-hued seats, has operated as a not-for-profit performing arts venue. Having featured performances by such luminaries as Bob Newhart, Tito Puente, Vienna Choir Boys, Joy Behar, B.B. King, George Winston, Richard Lewis, Ray Charles, the New Jersey Symphony Orchestra, Vanessa Williams, Paula Poundstone, Chuck Berry, Judy Collins, and Kathy Griffin, the theatre has received grants of $500,000 from Warner-Lambert Pharmaceuticals and $250,000 from Novartis. The South Street Theater Company, with the assistance of CEO A. Dale “Bud” Mayo, the founder and former owner of Clearview Cinemas, has raised enough funds to undertake implementation of a master plan designed by Michael Schnoering of the Princeton-based architectural firm of Ford, Farewell, Mills, and Gatsch, which has been involved in the restoration of several historic theaters. The $4 million, Phase 2 of the master plan, to be completed within a year, calls for the addition of a 3000-square ft. glass and limestone third floor. The new space will be utilized for receptions, seminars, and rehearsals. Phase 3 calls for addition of dressing rooms (the theatre currently houses only three), offices, and a loading lift system to get equipment to the stage level.

With an annual operating budget of $3.2 million and annual attendance of 90,000+, plans also call for addition of a bar in the balcony lobby and replacement of the theatre’s stage. The Community Theatre is reported to have some of the best acoustics of any musical venue in New Jersey, with no dead spots.

The Community Theatre in Morristown is kicking off an $8 million capital campaign tomorrow to fund its transformation into a venue big enough to host operas, Broadway-style shows, music festivals and large symphonies, in addition to its current lineup of concerts, entertainers and dancers.

Workers have already begun dismantling the back section of the theater, whose stage and three tiny dressing rooms are now a pile of rubble open to the elements.

In its place will rise an expanded performance space complete with off-stage wings, a “fly rail” system for set changes, a loading bay, a removable orchestra shell and an orchestra pit that can be raised and lowered.

The renovation – which is expected to be complete by the start of the next season on Nov. 3 – will make room for bigger productions, a year-round schedule, more education programs and a separate “black box” theater, said Allison Larena, the theater’s executive director.

Better air-conditioning will permit shows in the summer, Larena said.

And larger dressing rooms and a “green room” area will let the theater accommodate large troupes and celebrities more comfortably, instead of asking ballerinas to use the offices next door as a makeshift dressing room, and requiring symphony players to stand in the parking lot when they’re not on stage.

“You see the caliber of performers we have here,” Larena said. “We certainly want to make sure they’re happy performing here, so they come back.”

The theater has already raised $3.7 million toward its goal, she said.

The black box theater – which will seat up to 120 for education programs, cabarets and coffeehouses – as well as new offices is expected to open by late 2007.

Now, the school can function only on Mondays and Tuesdays, since the stage is the only available performance space and those are the only days the theater is dark. Plus, the main stage can be intimidating for rookies, she said.

Roy, who has already taught about 250 children ages 5 to 18, envisions using the smaller venue for classes and rehearsals, and eventually putting on splashy productions like “Annie” and “Joseph and the Amazing Technicolor Dreamcoat” on the main stage.

The venue could also host cabaret and jazz shows, as well as plays by local theater companies and colleges, she said.

The expansion, she said, “will make a huge difference.”

The venue was built in the 1930s as part of Walter Reade’s chain of cinemas.

It fell into disrepair and closed in the late 1980s, but hundreds of local volunteers joined forces to reopen it in 1994.

The venue’s superb acoustics convinced the St. Petersburg Kirov Orchestra to perform at a gala concert back then to kick off the effort to revive the theater.

After the work is completed, performers such as the New Jersey Symphony will be able to take full advantage of the theater, said Susan Stucker, the symphony’s vice president of operations and general manager.

The old stage couldn’t fit more than 80 players comfortably, but the renovated space will be large enough to host works such as Beethoven’s Symphony No. 9 – which requires a chorus, she said.

“The acoustics are really good, so we’re really excited to bring a bigger repertoire there,” Stucker said.

I remember passing the theatre in August of 1987 and seeing DISORDERLIES on the marquee. (I believe the theatre closed within that same year). You couldn’t get any farther from a Fat Boys movie than a symphony orchestra.

Liza Minnelli kicked off a fall tour in the Garden State at Morristown’s refurbished Community Theater. The singer looked great, boasting the loss of 45 pounds and proudly strutting in a smart and sparkling off-the- shoulder Casey Paul design, topped by a glittering head piece. And she was in great voice, retaining the incandescent punch and verve that has become her trademark.

Minnelli began on secure ground, dotting her repertoire with songs she belted out in her acclaimed Winter Garden run a quarter of a century ago: “I Can See Clearly Now,” “Maybe This Time” and the signature tune from her Oscar-winning “Cabaret.”

She still commands the powerhouse drive that has long marked her career, but sat down midway through her act.

Minnelli, the sultry chanteuse, harbored restraint with some comforting evergreens. Beautifully nuanced readings of “My Ship,” “The Man I Love” and “He’s Funny That Way” reminded the listener of her gift for torchy nuance.

Second half of the program was an affectionate tribute to Minnelli’s godmother, Kay Thompson, the legendary night club entertainer who also penned the popular Eloise books, inspired by little Liza’s adventures at Gotham’s Plaza Hotel.

As an entertainer, Thompson, assisted by the Williams brothers (including a young Andy), was a popular figure on the club circuit. Minnelli, supported by a quartet of young men, recreated highlights from Thompson’s act with a rousing “Jubilee Time” and a sultry “Basin Street Blues.” Tribute peaked with “Clap Yo' Hands,” a Thompson rouser from the film “Funny Face.”

“I Love a Violin” appeared to take the wind out of the 61-year-old entertainer, who took a break as the gents offered the Thompson arrangement of the Gershwins' “Liza,” a sequence subsequently cut from the 1946 tuner “Ziegfeld Follies.” The song of course, served director Vincente Minnelli and MGM star Judy Garland as their daughter’s moniker.

The singer wound up with her trademark nod to the city that never sleeps, “New York, New York.” Responding to a standing ovation, Minnelli bid farewell to a capacity aud with an a capella offering of “I’ll Be Seeing You.”

Above review reprinted from Variety.

When Walter Reade launched his new circuit, American Community Theatres, in 1936, he intended all of the houses in the chain to share a single architectural style, that being Colonial Revival. Several of the new theaters were opened in 1937, and these were designed either by William Hohauser or by Thomas Lamb.

Because Reade exercised such close control over the design of these theaters, it is sometimes difficult to tell from appearance alone which of them were designed by Hohauser and which were designed in Lamb’s office. However, in the case of the Morristown project, despite the fact that I’ve been unable to find a source identifying which architect designed the house, we do have a comparable theater opened the same year in Tom’s River, New Jersy, which is definitely a lamb design. Compare the photo of the Morristown Community linked in Justin Fencsak’s comment above with this vintage photo of the Community Theatre in Toms River, New Jersey. They look virtually identical to me.

The only Hohauser-designed Community Theatre I can find a photo of is the one at Hudson, New York, pictured in this photo from the Library of Congress. The Hudson house was larger than the New Jersey houses, which might account for some of the differences, but the entrance treatment and decorative details are handled quite differently in Hohauser’s Hudson design than they are in Lamb’s Toms River project. If I were laying a bet, I’d say the Community Theatre in Morristown is a Thomas Lamb design.

The Community Theatre in Saratoga Springs looks just like it, and it too is a Lamb design.

I saw the Moody Blues in concert here last night, and was very impressed by the band and also by the theatre. Just beautiful.

As a child, I saw movies at this theater. Later, when they switched over to live actors, I saw “Oh Calcutta”, performed live in the nude. Years ago my mother attended Morristown High School. She said that graduation was held at the Community Theater.

I went to the Community Theater as a child in the 1960s and have one lasting memory from those days, on which I’d like to get feedback and/or information. Before the feature films on the weekends, they’d show a black-and-white, slapstick, silent short of a bicycle race, with racers numbered 0-9 (as I recall). If the racer’s number matched the last number on your movie ticket, you’d get a free popcorn or small prize, or something like that. I never saw those shorts at any other theater, but I loved watching them and cheering for “my” bicycle racer. If you remember those bicycle races, please let me know and share whatever you can remember from them. I’ve searched for information or video of them online in vain, but am not giving up!