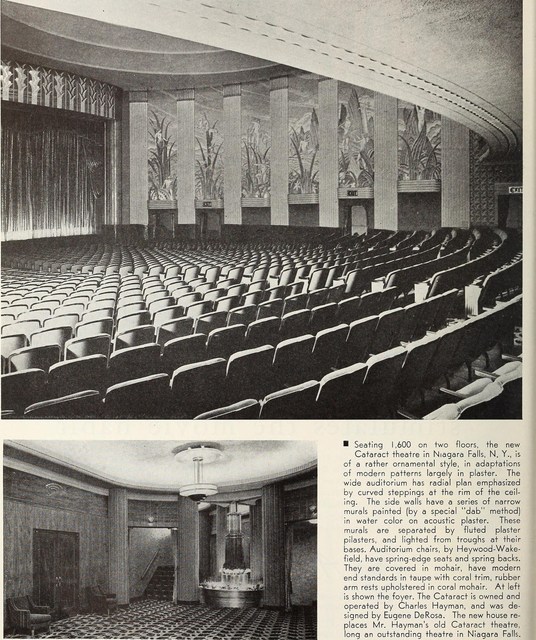 The Arcade Theatre was opened on December 8, 1909 with 600 seats. In 1912 it was enlarged to 1,200 seats and renamed Cataract Theatre. In 1923 it was equipped with a 2 manual Marr & Colton organ. This movie palace had a large marquee with plenty of lights and vertical sign. Big screen. Gorgeous interior. The theatre was torn down in 1970, as part of an urban renewal project.

If you read through this website you will find that Rafael Beck did the murals for the Strand and Cataract Theaters.

What amazes me is that this gorgeous theater, along with the Strand which was next door, were torn down in the name of urban renewal.
What replaced them along with the other buildings that were demolished is a now vacant mall and parking ramp,an amusement center which was once a wintergarten, and a number of street vendors.

LOUB: …and that, sad to say, is the ongoing story of Niagara Falls NY.

I lived in the Niagara Peninsula across the border from Niagara Falls NY and saw a few films at the Cataract. Probably the most memorable was C. B. DeMille’s The Ten Commandments. I wasn’t very old at the time, but I do remember that the projection was excellent, the seats were very comfortable and the surroundings were definitely a cut above any of the theatres on the Canadian side. It’s really a crime that this theatre and most of the buildings around it were torn down. And what took it’s place is not an improvement.

This article deals with the 1929 acquisition of the Cataract and Strand Theatres by Fox Theatres.

In response to an early post regarding the definition of CATARACT, I have to admit that I half expected this theater to be located in Egypt. The term cataract is used ubiquitously for the several series of rapids that exist along the Nile. They are numbered higher as one goes upriver (South). Only one of them is in what is now modern Egypt—the First Cataract, which is at Aswan, where the Nile has to fight its way through a vast outcropping of granite. It was near here that the ancients procured the red or pink granite used for statues and the interior walls of some of the greatest pyramids, among other things. Certainly the falls of Niagara qualify as a cataract of dramatic magnitude, it’s just that the term these days is rarely found outside of Egyptology and geography. It’s very interesting to find a theater that was so named.

For an instance of the term’s use in a movie taking place in Egypt, one need look no further than “The Ten Commandments,” where Yul Brynner says to Charlton Heston, (I quote as best as I can from memory) “When the waters ran red with blood, I too, was afraid, until word came of a moutain beyond the cataracts which spewed red mud and poisoned the water…. These things were ordered by themselves, not by any god.”

I’ve read that the “old” Cataract had over 2000 seats and had one of the largest seating capacities in Western New York.

Although I was never in the Cataract Theater, I just cannot resist jumping into such a linguistic Juggernaut (anything to which a person blindly devotes himself — American College Dictionary — to save further dissertations).

Indeed, this movie house was once part of a totally thriving downtown area just steps away from the famous waterfall. It’s demolition, along with the rest of that entire district, was all part of a cataract effect (cascading downward…..) that continues to this day.

The aforementioned ‘Wintergarden’ greenhouse, which was built close to where this theater stood, was joined to a large indoor shopping mall which closed about a decade after it opened. Just a few months ago, the Wintergarden itself was torn down, now leaving a gaping hole next to the still abandon and deteriorating mall.

A huge convention center was build about 5 blocks from where this theater stood – squarely in the middle of what used to be the main street all theaters were on. It lasted about 20 years and is now a gambling casino!

Above is a 1950’s view of downtown Niagara Falls with the Cataract on the left side of the street with the Strand Theatre behind it.

“The Cataract Theatre was purchased by Mr. A. C. Hayman and Mr. Joseph A. Schuchert in 1910 from the Crick Realty Company, the Crick interest retaining part ownership until a later date, at which time they disposed of their holdings for many times more, than their original investment. At the time of purchase it was known as the Arcade Theatre having a seating capacity of 600.

“This theatre was remodeled in 1912 and the accomodation increased to 1,600 seats at an expense of $95,000. The Cataract Theatre is now catering to 20,000 theatregoers weekly, and during the summer of 1920 this theatre catered to capacity houses daily.”