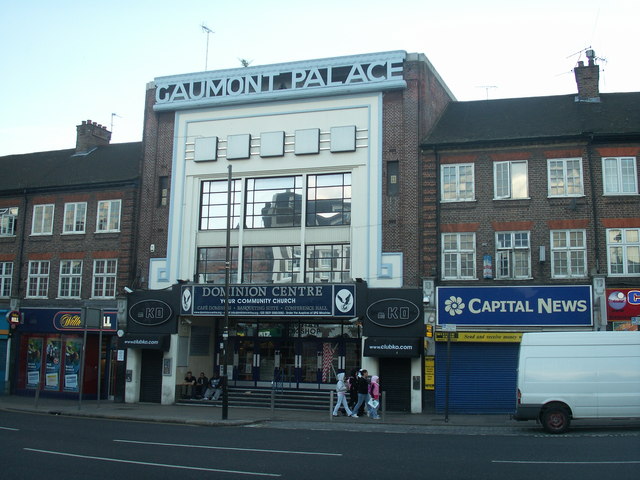 Located in the north London district of Wood Green. On this site was originally going to be built an ‘Astoria Theatre’ but the scheme fell through and the land was purchased by Gaumont and Associated Provincial Picture Houses who built the new Gaumont Palace Cinema in eleven months.

It opened on 26th March 1934 with Brian Aherne in “The Constant Nymph” and Slim Somerville in “Love, Honor and Oh Baby”. A full vaudeville show was presented on the stage and Frederic Bayco opened the Compton 3Manual/12Rank organ.

The entrance was located in the centre of a parade of shops and was faced in brick and white stone with the name spelling ‘Gaumont Palace’ located in a recess on top. There was a large entrance hall which had a cafe/restaurant above that seated 170 diners. The auditorium was at right-angles behind the parade of shops. The main feature of the decoration within the auditorium was the large semi-circular proscenium opening which resembled a similar one in the Titania Palast Kino in Berlin, Germany. There was a large stage 30 feet deep and 80 feet wide, a fully equipped fly tower and eight dressing rooms.

It became the Gaumont Theatre from 1954 and was re-named Odeon from September 1962. By then the cafe/restaurant had closed and was in use as a Victor Sylvester dance studio. In 1966 the organ was removed to Twickenham College of Technology and in the late-1970’s was installed in the Thorngate Hall, Gosport, Cheshire.

The Odeon was tripled in December 1973 with 814 seats remaining in the former circle and 450 in the former front stalls which gave a seating capacity of 1,264 in the main screen and two mini cinemas located under the circle that seated 149 and 150. The Odeon closed on 7th January 1984 with Walt Disney’s “Jungle Book” in the main screen and Ken Marshall in “Krull” playing in both of the two mini screens.

The auditorium was de-tripled and returned to a single space that was converted into a Top Rank Bingo Club. Later operated by Mecca Bingo, this closed in July 1996. After period of over three years laying empty, the auditorium was converted into a church named Dominion Centre, whilst the former cafe/restaurant has been in use as a nightclub which in 2019 it is named Rio Nightclub.

The building was Listed Grade II from 26th March 1990 and was upgraded to Grade II* from October 2000. The name ‘Gaumont Palace’ was reinstated back into its recess on the top of the facade in 1993. Early in 2006, the nightclub painted the facade black, which is against the rules of listing, as it is considered an ‘alteration’. The planning department of Haringey Council ordered the offending paint-job removed in 2007.

Photographed in April 1971 while still a single screen:
View link

An extensive photo set from the recent London Open House weekend, shots of the auditorium, stalls and circle lounges, lobby and exterior of this stunning building
View link