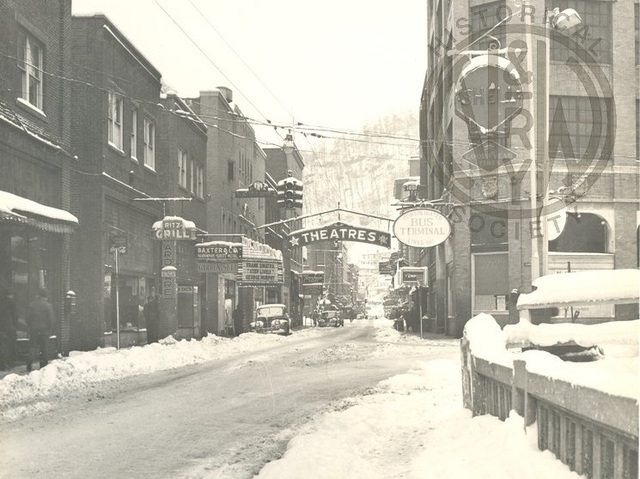 Opened Christmas Day, 1928 in Welch, WV, “the heart of the billion dollar coalfields”. One of the first theatres to use indirect lighting in the auditorium, and, with its magnificent theatre organ, was called “The Showplace of McDowell County”.

Managed in the 1950’s by L.E. Rogers, who was mayor of Welch. Later, managed by “Buddy” Rogers, his son. The Rogers family was sued in the 1950’s by the film companies for under-reporting grosses at the Pocahontas Theatre and their other theatre in Welch, the Temple Theatre opposite.

The theatre was remodeled and prospered during the 1940’s and 1950’s, but when the coal boom ended, and as McDowell County lost 80% of its population over the next several years, it began to deteriorate. It was destroyed by fire (possibly an insurance arson fire) in 1978.

Here is a photo of the Pocahontas Marquee:

There is an interior photo of the Pocahontas on this page:
http://tinyurl.com/3qozpv

The West Virginia History page Lost Memory linked to says that Alex B. Mahood was the architect of the Pocahontas Theatre.

This web page has the transcript of an article about the Pocahontas Theatre from the December 22, 1928, issue of the Welch Daily News.

My grandfather, Dr. John E. Davis, had his medical office “over” the theater in the 1930s.

I’m not seeing the photo linked by thegreev in an earlier comment (I don’t know if it’s gone or my browser simply isn’t fetching it) so I don’t know if this is the same one, but this 1963 photo shows the entrance and part of the marquee of the Pocahontas Theatre.