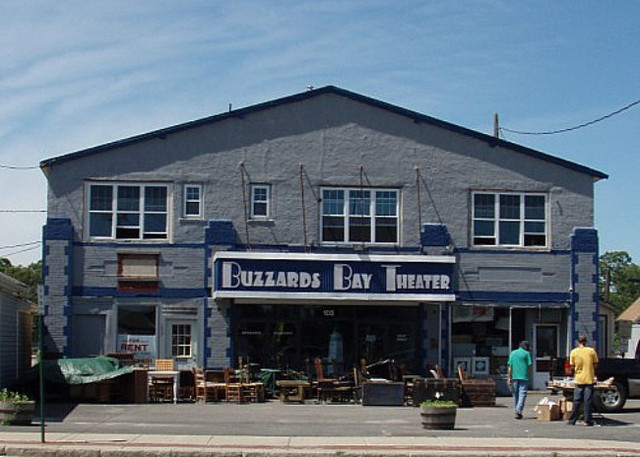 Opened in April of 2007 after having been closed since 2001, the Buzzards Bay Theater was showing second-run films.

Another one bites the dust. How sad.

The Quincy Patriot Ledger had a short item yesterday about the application for a permit to demolish. It says that the Buzzards Bay Theater dates from the 1920s, was closed as a Hoyts Cinema in 2001, and that a new operator, Jeff Avery, spent $165,000 in improvements in 2006-07 in an ill-fated attempt to reestablish it as a cinema. The news item says that the owners want to put a parking lot on the site. The theater has been closed for well over a year now.

As of this past Sunday, it’s still standing. The lobby is being used for storage (possibly the auditoriums as well). There is a for lease sign on the building – commercial/subdividable.

So is it still there?

I heard that it was demolished very recently.

According to this very short article(which includes photos), it was demolished in mid-November 2009. They didn’t even save the old Chevrolet sign or concrete relief Buzzards Bay Garage sign. Depressing.

Video shot during the demolition

The Theatre Historical Society archive has the MGM Theatre Report for the Buzzards Bay Theatre. Located on Main St., 693 seats, Excellent condition. It says it was built about 1938. There is an exterior photo taken in July 1950.

This weblog post from MassHistory has several photos of the Buzzards Bay Theatre, including an early postcard that appears to be from the 1930s.

PHOTO OF BUZZARDS BAY THEATRE IN 1950 MGM REPORT Thanks to Theatre Historical Society of America.