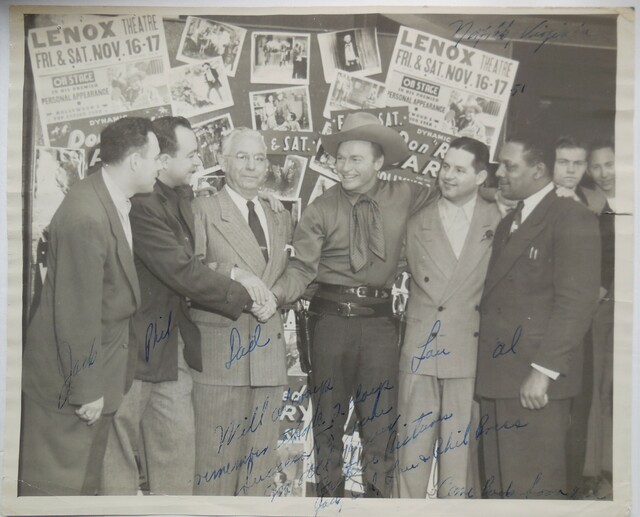 This was an African American theatre. I think it opened about 1940 and closed in the late-1950’s.

I was born and raised in Norfolk. My father managed the Lenox Theater circa 1943-44. There were six African-American theaters on Church street, within four block of each other. Booker T. (now Attucks) 1008 Church St, Gem 815 Church St(also know as the Rio), Regal 830 Church St., Carver, Dunbar 660 Church St. and Lenox 706 Church. St. My father also managed the Regal and Carver Theaters in the late 50s. I left Norfolk in 1960, and the Regal and Carver were still open for business, but the Lenox had closed. We had a photo of my father standing in the lobby of the Lenox, but unfortunately, I don’t know who has it now.

I too grew up in Norfolk. I remember going to the Regal, Lenox, Carver, & Dunbar during the 60’s. The Regal was the most popular. We enjoyed all of the black exploitation movies at these establishments. My grandmother owned & operated a beauty school at 1059 Church Street during those days.

I grew up in Norfolk in the 70’s. Me, my brother, and cousin used to go to three different African American movie theaters on Church Street. In the 70’s the movies on Church street that were open for business included Dunbar, Regal, and Lenox. We often stayed at my grandmother’s place in Young Park. Young Park was a neighborhood that was a 3 minute walk from Church street. The first movie I ever saw in any theater anywhere was Three the Hard Way. That was a black exploitation movie. I also was first introduced to Bruce Lee movies and other kung fu movies at these three church street movies.

when enter the dragon was playing at the lenox, I was working at the carver. msbooth

I grow up a block from Church Street. Use to go to the movie often. After I graduate from High School, I got a job at the Dunbar and then the Lenox theaters. I worked from 1960 to 1965. I think the Theaters closed in the early 70’s. The names of the movies on Church Street were: Lenox, Dunbar, Booker T., Regal, Rio, and Carver, (all these movies were owned by the Bress Brothers) I helped out at all the theaters but my main theaters were the Dunbar and Lenox.