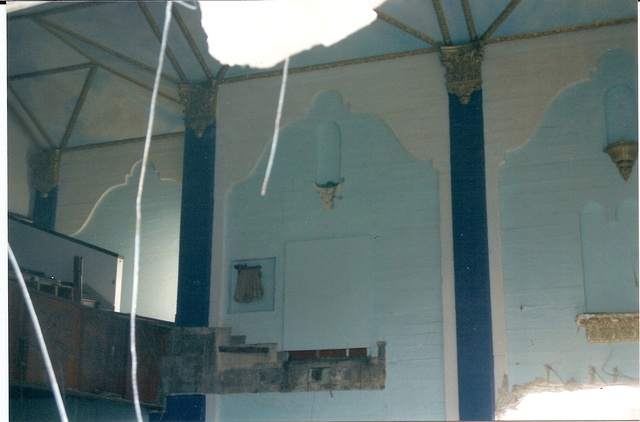 The Broadway Theatre was opened March 21, 1930. It was renamed Encore Theatre in April 1965 and closed in 1972. It became a church. The outside of this theatre gave no indication of what was on the inside. For years this theatre lay dormant while a man known as ‘The Rev’ worked inside restoring this old structure. It was a wonderful theatre with red carpets, a mural of the daytime sky on the celing, and angels looking down from their perches high above the floor.

Despite its adornments, one thing this theatre lacked was luck. The city of Burlingame deemed it unsafe and condemed the Encore Theatre saying it would not survive a earthquake. Despite its supposedly flimsy construction, it took the city a full three days to demolish the building in 1998.

The Encore, was a beautiful theatre. It was one of a kind, with a projection system that was fully automated (dimmed the lights opened the curtains) with one of the very first automated platter systems, which became a white elephant, made by Bell and Howell. I saw the movie “The Other Side Of Midnight” there. Unfortunately for the theatre, it was in a area where the ground, that became saturated by the rains, would flood the interior of the theatre. Pumping system was too expensive to maintain, and horrible mold and mildew infested the place. Rev could not keep up with the insurance. The vertical “Encore” sign had like a 1880’s saloon style look. There were train tracks nearby and the Theatre would rumble a little. Magnificent interior with gold grilles, and busts of ladies everywhere. Seating was very comfortable.

My photograph of the ENCORE View link

Does anyone remember when Ward Stoopes owned and operated this theatre?? I’m sure he was the last operator of this wonderful little showhouse.

Larry, it was 1968 he was the last operater there

Ward was still trying to hang in there with the Encore in the early 70’s while he was in the maint. dept. with National General/Mann Theatres. It would seem he finally closed it around 72 or 73. It never reopened after that.

Greetings Larry! I knew Ward F. Stoopes. Worked for him 7.5 years (1965-1972)first as janitor, candy counter sales and eventually became the projectionist when I was only 13 years old! Many stories/memories @ the old Encore. Hope connecting with you. John Baldini

John……Your name rings a bell from my past. Contact me direct at .