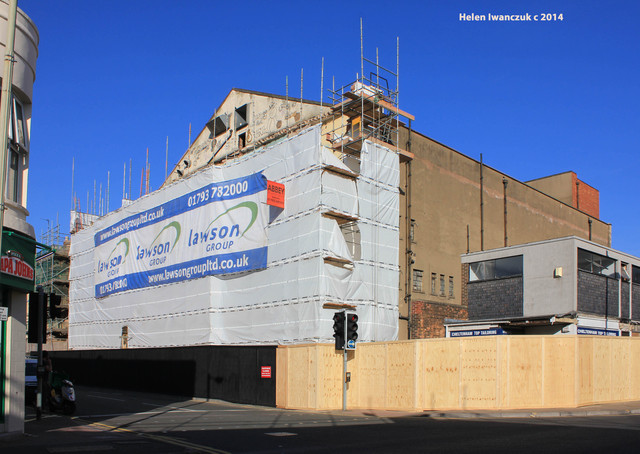 Originally opened on 6th March 1933 as the Gaumont Palace Theatre it was a project of Gaumont/Albany Ward and PCT and had a seating capacity of 1,774. Additional facilities included a 100 seat cafe/ballroom. The facade has two relief sculptures by Newbury A. Trent, which depict dancing figures holding up strips of celluloid, capturing the ‘spirit of romance of the film’. The safety curtain had a painted scene by artist Frank Barnes. The proscenium was 45 feet wide, the stage 22 feet deep and it was fully equipped for live shows. The Gaumont Palace Theatre was equipped with a Compton 3Manual/8Ranks organ which was opened by organist Alfred Furnish.

In 1937 it became the Gaumont and was re-named Odeon from 16th December 1962. Pop shows brought the stage into use in the mid-1960’s with The Beatles and The Rolling Stones appearing. Divided into a triple screen cinema from 1973. It was later further sub-divided into seven screens, with the extra screens being formed out of the former cafe/ballroom in 1987, the front stalls and on the stage in 1989.

The cinema was closed 5th November 2006 and was demolished in July through September 2014.

I have very fond memories of The Odeon, my Mother used to work there as an usherette in the 1970’s. My Brother and I spent many happy hours there watching films and roaming around the cinema – much to the annoyance of an audience that was watching a film that happened to be on at the time! It is a beautiful building and a much missed cinema, it still stands empty.

Another photo of The Odeon, taken in April 1999.

A picture of the auditorium taken in 1933 can be seen here.

Sadly, workmen are currently demolishing this cinema. Originally called the Gaumont, it was a music venue as well a picture house. The Beatles played this venue in the early 1960s. In a couple of weeks it will be gone forever.

A dramatic art moderne/art deco masterpiece. Tragedy it is gone. What a waste!

The Odeon is still standing – but only just. It is being demolished as we speak.

Please check out my report on the demolition of The Odeon, in the Leisure site section of Derelict Places. www.derelictplaces.co.uk

This beautiful old building is now sadly gone. I worked as part of the Cheltenham Odeon management team from 1991 – 2005 and when the building was starting to be demolished in the autumn, I managed to secure the old Odeon canopy sign (as seen nearest the camera in Ladygrey’s picture (28/11/10) from a local Bric-a-Brac/antiques shop. When you consider the history of this building (73yrs-old and the birth of ‘Beatlemania’), I feel I have a sentimental bargain

‘The Celluloid Ladies’, relief sculptures that flanked the Odeon name on the cinema’s frontage, were saved during demolition. They were restored in August 2015 and have been relocated, with an information plaque, to an outside wall of the town’s Brewery Quarter, which contains the Cineworld and Screening Rooms cinemas. See my photos.