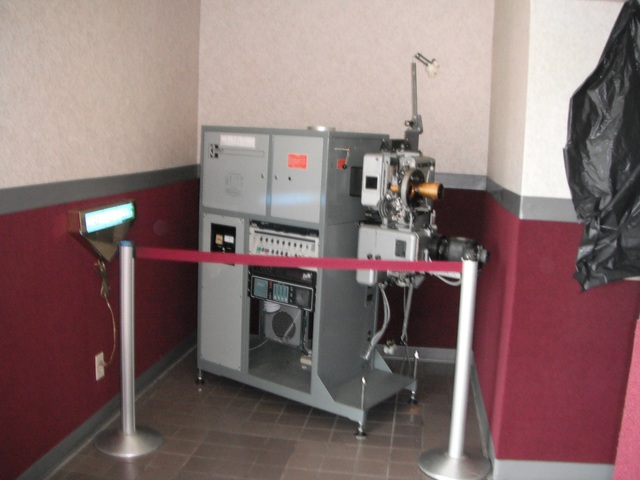 Small multiplex built in 1992 in the downtown historic district of Reedsburg. Constructed of textured concrete block, with a large lobby and parking lot adjacent. It was heavily damaged by the June 2008 floods and was closed. The building was subsequently used for storage.

The Star Cinema was restored and re-opened on November 19, 2010. The building was flooded again in September 2018 and by early-October 2018 2 screens were back in operation. Renovation continues on the other 4 screens. It was closed with only two screens operating in March 2019.

The grant funds being sought for re-opening are not necessarily a sure thing, as this article points out.
http://tinyurl.com/38sqpua

An agreement has been reached between the city and a developer and the theater is expected to re-open by the end of the year: View link

A STAR IS REBORN: Cinema reopens to rave reviews

“A great day in Reedsburg.”

Those were the words Don Lichte, chairman of the Reedsburg Industrial and Commercial Development Commission, used Friday to describe the reopening of the downtown Star Theater.

“It’s a day of celebration and we’re only beginning,” he added.

Thanks to a flood recovery grant in the amount of almost $900,000, two local business owners were able to reopen the cinema, which has been closed since the flood of June 2008.

Fusch and business partner Chad Ellet also co-own the KFC restaurant on the east side of Reedsburg. They thanked the businesses and individuals who helped them fix up the theater on time for their targeted premiere date of Nov. 19.

As excited as Fusch and Ellet were about the opening, people in the community who attended a ribbon-cutting ceremony Friday afternoon might have been even more thrilled.

“We’re so excited to see this thing open up again because my uncles haven’t been able to get to the (cinema in Wisconsin) Dells,” John Mueller said. “It’s great that it’s open so we can see a show here.”

Mueller pointed out that driving to Wisconsin Dells takes him about 45 minutes round-trip, making a two-hour movie a much longer “adventure.” He plans to visit the theater in Reedsburg frequently.

After seeing the damage the flood did to the theater more than two years ago, Shawn Klingbeil and her husband, Kurt, were glad someone finally fixed it up and got it open.

“We came in a couple of days after the flood and after seeing that, we’re just happy it’s open again,” Shawn said.

Kurt said their oldest son worked at the theater when it flooded. Fusch said they plan to hire about 25 to 30 employees for the theater, especially as they near the holiday season.

Moviegoers can call 768-SHOW for listings.

If the Reedsburg movie theater reopened tomorrow, the fare might include “Titanic,” “Waterworld,” “Bridge on the River Kwai,” “Don’t Drink the Water,” and, perhaps “Like Water for Chocolate.” But it won’t reopen, because in Reedsburg, the day the movie theater died was June 9, when the Baraboo River ran through it. Now, businesses that counted on customers who shopped and dined with a movie date are feeling the effects of the closing. Even the decision two weeks ago to permanently close has irritated city officials, who have been trying for months to get the Chicago-based Kerasotes company to confirm its intentions.

City administrator John Dougherty hinted this week of a local takeover of the six-screen theater, something that would be welcomed by Reedsburg resident Julie Fitzgerald, who just wants a chance to take her children to a local matinee again. “They kept changing their tune,” said Dougherty this week of the company’s recent decision to close the Reedsburg Star 6 Cinema. “Now they are saying that while they are not planning on reopening it, they would like to sell it,” he said. Prior to that, the company had indicated they would use the building for storage.

The theater has been closed since June, when record rains turned the Baraboo River through downtown Reedsburg into a lake, with the cinema building an island. Despite several feet of water inside, city inspectors report today there is no mold and “everything cleaned up just fine,” Dougherty said. The movie house, he said, is vital and brings in weekend traffic to Reedsburg’s businesses. With that in mind, and the suggestion from Kerasotes that it wants to sell, the city “has been working with someone local who expressed interest in opening it back up,” Dougherty said.

City help to reopen the enterprise on the property, valued at just over $1 million, would be limited. The city pitched in several years ago when this building was opened. Attendance at the cinema, up to its closing, was good, Dougherty said, and no other Reedsburg businesses closed because of the flooding.

Fitzgerald, who with her husband and two children regularly attended matinees as a family treat at the cinema, said prices went up when Kerasotes took over the movie theater last January, and that may have led to fewer customers. She said the cinema was able to show current movies on its six screens with a good selection that included family fare. “We miss it, we would come in and have dinner or lunch and go to a movie; we just don’t drive to the Dells for a movie,” she said. “It wasn’t crowded but it was pleasant,” she said.

At the Chamber of Commerce, Carrie Covell feels let down by the closing. A movie theater should be able to survive, she said, “because we are a feeder community for quite a few small communities,” including from neighboring Juneau County. “This is prime real estate downtown. A movie theater brings in dinner guests and cocktail drinkers, and afternoon shoppers,” she said.

A memo from Kerasotes to the city said the company “will continue to maintain and use the building for storing equipment and staging purposes.” That could mean the building might not be available for sale to another company that might open a movie theater that would compete with the company’s Wisconsin Dells-Lake Delton theater. Because the building is on a commercially zoned lot, using the theater as a warehouse for storage is legal, with conditions, said city building inspector Art Biesek.

No one from Kerasotes returned telephone calls for comment.

The company also owns Star Cinema in Fitchburg, which it purchased at the same time it purchased the Reedsburg theater and four other Star Cinemas last January. Kari Walker, owner of the Touchdown Tavern on the same street as the now-closed Reedsburg theater, said many have speculated about Kerasotes' plans, and suffered from the closing. “Any time you have an additional 20 or more vehicles in town, the chances are some of those people are going to go to more than one place, they’re going to grab a bite to eat, pick up some shampoo, buy a cell phone case,” she said. “We consider it a significant loss for downtown, because it is also something for all ages,” she said.

Dougherty remains optimistic the theater will reopen, that “someone else will make a go of it. "We still have the option of giving or not giving (Kerasotes) a conditional use permit to use the building as storage,” he said. The company wouldn’t intentionally keep it closed to help out its Dells theater because “the Dells is going to grab the people who don’t wander far from the Dells, and Reedsburg would be for our surrounding community who don’t want to deal with the traffic of the Dells.”

After the digital conversion last year, a platter and 35mm projector have been put on display in the lobby. I’ve added pictures of these artifacts to the photos section.

Looks like a repeat of the 2008 flood that closed the theatre. Currently the water is cresting higher than back then, so the theatre is closed until further notice. The railroad museum in nearby North Freedom has been inundated again.

The theatre has reopened 2 of the 6 auditoriums to show movies. The others are still be renovated from the flood with new seats on order. Their Facebook page shows some of the devastation from the flood.

the theatre has announced on its website that it is closing for good and will not reopen. They say that only 2 auditoriums will not support the theatre operation.