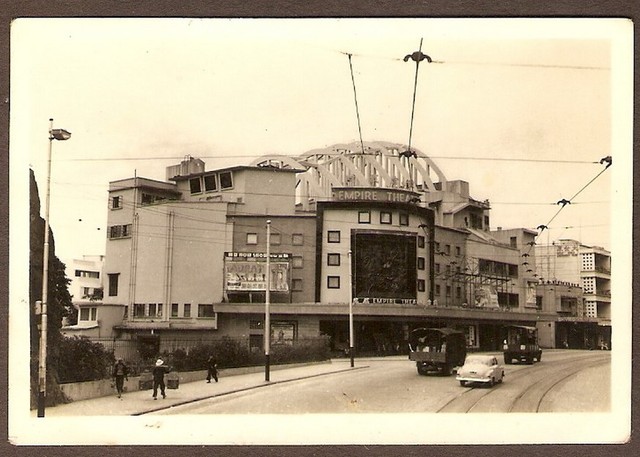 The Empire Theatre was the first deluxe theatre to be built in the newly developed North Point neighbourhood on Hong Kong Island. It opened on 11th December 1952, with Bing Crosby and Jane Wyman in “Just for You”.

The theatre was managed by Harry Odell’s Commonwealth Enterprise Corp.Ltd.

According to its opening advertisement, the theatre had a free underground car park for the patrons.

An external feature of the building is the series of exposed parabolic concrete arches on the roof, possibly the only known example in the world. The theatre building had a restaurant and a billiards house, and the auditorium was on the first floor. It had a tringular shaped stage for stage performance. Due to the lack of a proper concert hall in Hong Kong in the 1950’s, the theatre was an alternative venue for recitals by visiting soloists. In 1956 British tenor Peter Pears appeared with British composer Benjamin Britten.

A residential block was built on the adjacent site, and the theatre building became its annex.

The renamed State Theatre opened to business after extensive renovations on 8th February 1959 with a re-run movie “Pal Joey”.

An advertisement for the new theatre boasted of:

The spacious lobby on the ground floor of the former Empire Theatre was converted into shops with only a small part remained. The lobby of the State Theatre was connected with the shopping mall in the adjacent residential building. The underground car park was not mentioned and I assume that it was closed.

Cantonese operas were also always performed at the theatre. It was a favourite venue for Mandarin vaudeville shows in the early-1970’s.

In the remaining years before its closure, the apparatus and service of the theatre deteriorated rapidly.

Nowadays, the auditorium has been converted into a billiards hall, and the facade of the theatre building is covered by huge bill-boards. In 2016 plans were proposed to attain a Grade I Listing for the building.

The history of State Theatre was amazing. My memory can only be traced back to the early 80s when State, together with Queen’s in Central and Tai Ping in Western District, was under Golden Harvest Circuit. It seems that GH had many of the important cinemas in Hong Kong at the time.

Its Chinese name is 璇宮戲院 and 皇都戲院。

I used to live at Empire Apartments (to the right of State or Empire Theatre). Suwanti, is there any chance you can enlarge the photo so that I can read what was written on the building which was the precursor of Empire Apartments?