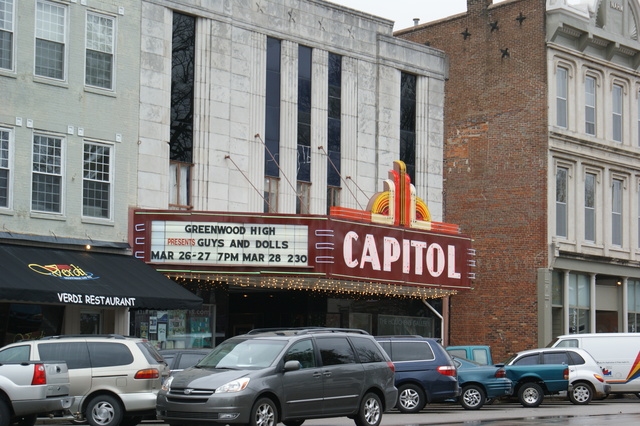 Built around 1890 under the name Columbia Theatre. On March 21, 1921 it was renamed Capitol Theatre, reopening with Constance Talmadge in “Dangerous Business”. On March 23, 1939 it was reopened following a complete rebuild in budget Art Deco style as a cinema with a small stage. The multi-colored neon marquee is quite handsome. The lobby is simple and tasteful. The auditorium, is quite, quite plain with only some simple cove lighting and a decorative proscenium. The auditorium retains its old plan: two aisles, fifteen seats across the middle, seven (or so) seats at the sides.

The cinema closed in 1971 and stood empty for almost 10 years. Capitol Arts bought the building in 1977 and by 1981 had raised almost $2 million and successfully renovated the entire building.

Unlike many small-town cinemas which have been rebuilt as community arts centers, this building was able to make the transition and retain almost its entire original configuration. Auditorium space did not need to be stolen to expand the stage or create a lobby. Additional square footage was obtained for offices and art galleries by opening into the former retail spaces on either side of the lobby.

In order to accommodate modern stage lighting a metal truss was introduced into the auditorium from which lighting instruments could be safely and effectively mounted. That truss is an intrusion to the room’s otherwise clean, straight lines, but the additional visual interest, even if something of an anachronism for a 1930’s theatre, is not unwelcome. And let’s face it: you have to have lights.

The Capitol continues to operate successfully and once again is a major contributor to the city’s entertainment venues.

Here is another view of the marquee:
http://tinyurl.com/2mgq3x

I looked for the circa-1890 Columbia Theatre in the 1897-98 edition of the Julius Cahn Official Theatrical Guide. But the only theater listed under Bowling Green KY was Potter’s Opera House, no street address given, managed by J.M. Robertson and having 950 seats.

Well, someone explain to me How THE CAPITOL closed in 1967 when on Jan 1 1969 it was playing “THE IMPOSSIBLE YEARS” you guys got a date wrong.Check the local paper MOVIE ADS like I do.

Great looking marquee on this one.

This place is classic. When I first moved to Bowling Green from Chicago in 1992, I spent my first New year with my ex-wife here, as the town was doing “First Night” I got to see Jeff Foxworthy, and talk to him after. If I can get some pics of the inside, I’ll post them.

Hemmings Motor News article with a photo of the Capitol during the Corvette Homecoming. 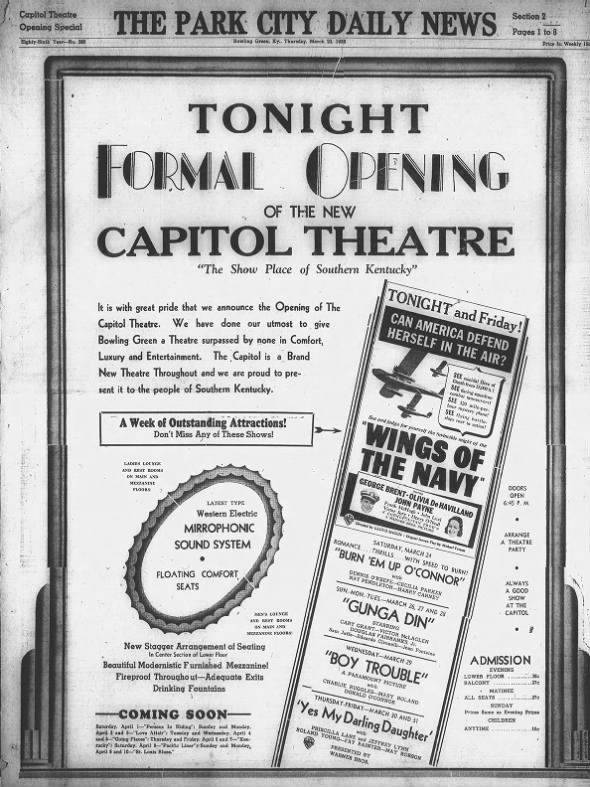