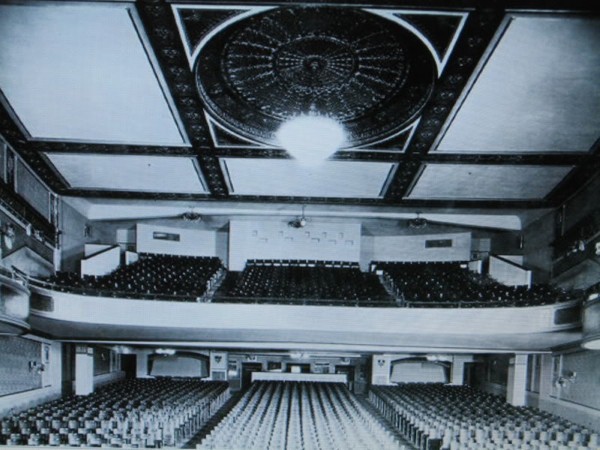 The Victoria Theater was one of two theaters located in Mt. Carmel, Pennsylvania and was located at W. 3rd Street, between Pear Street and Maple Street. It was an early design of William H. Lee whose first theater design was the Victoria Theater in Shamokin, PA.

Mr. Lee Started his career as an architect with the Shamokin Lumber Company. The theater was built around 1920 by Chamberlain Amusement Enterprises and was later operated by Victoria Amusement Enterprises which also operated theaters under this name in Shamokin and Mahanoy City. It was a large theater and like the other Victoria Theaters in the group it had a very large screen which has been added in a 1953 update.

This theater was still open in 1967. It was then part of the Magazzu chain. Peter Magazzu’s office was on Third & Pear Streets in Mt. Carmel.

Here is an interior photo from the Irvin Glazer theater collection:
http://tinyurl.com/kp5nf5

According to an item in the July 15, 1922, issue of The American Contractor, the theater to be built in Mt. Carmel that W. H. Lee was designing for Chamberlain Amusement Enterprises was to be sited on a 100x150-foot lot at 3rd and Maple Streets. Lee designed a number of theaters for Chamberlain Amusement during this period, but no others in Mt. Carmel, so the item must give the location of the Victoria.

When Lawrence J. Chamberlain died in 1949, a brief obituary appeared in the March 12 issue of The Billboard, mentioning that he was president of Amusements, Inc., with theaters at Allentown and Williamsport, as well as general manager of Victoria Amusement Enterprises, with theaters at Mt. Carmel, Shamokin, Mahanoy City, and Tamaqua.

Actually, I remember three theaters in Mt. Carmel: The Vick, The State (where the Post Office is) and the Hollywood on Oak St. It was very narrow and long; just one center aisle; probably no more than 8 seats on each side. It later became the Hollywood Lanes bowling alley (4 lanes) and in its present incarnation is the Hollywood Pizza which it has served since I went to MCCHS in the early ‘60’s

This weblog post has two small photos of the Victoria Theatre. The building extend along W. Third Street from Pear Street to Maple Street, but the entrance was at the corner of Pear Street (which looks more like an alley to me.)

Stick82: Did the State Theatre front on Third Street, or on Hickory Street like the Post Office does?

Joe Vogel: The State fronted Hickory. As I remember it, the theater was one building in from Third. There was a defunct “mansion” on the SE corner of Third and Hickory, a vacant over-grown lot behing the “mansion” which made the “right” hand side of the State visible from Third, and then the still active hoagie/pizza shop at the corner of Third and S. Orange alley. This shop was diagonally located from the now demolished Mt. Carmel Public HS. If you faced the front of the State, your back “faced” another defunct “mansion”(now also a drive thru bank) that once temporarily housed Grossman’s Dept Store while the actual store (site of the present Library) on S. Oak was rebuilt after a fire. So, looking at the front of the State, facing its entrance on S. Hickory, there was the defunct mansion, the entrance to the State, and then a small tavern. All three of these are now occupied by the P.O. Anything else I may be able to help you with, please let me know.

Thanks, Stick82. We mistakenly had the State listed on Oak Street. Now we can surmise that it’s address was probably 3 S. Hickory. If you would like to comment on the State Theatre, there is a link to its Cinema Treasures page in the “Nearby Theaters” field on the right side of this page. There is also a page for the Hollywood Theatre, and we just added a page for the Theatorium, with a couple of vintage photos from 1913 (though I don’t suppose you’d be old enough to remember that long-gone theater, which was probably closed by 1929.)

I recall going to see Peter Pan, Support your Local Sheriff and the Longest Day at the Victoria in 1969 (my grandmother lived across the street from the theater).