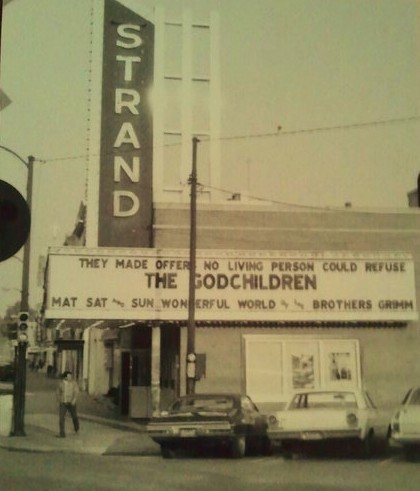 The Strand Theatre was the larger of two Sunbury theatres, the smaller being the 612 seat; Rialto Theatre.

Originally opened in 1910 as the People’s Theatre, it was a handsome light brick building with a grand marquee that featured moving lights and provided quite a bit of life and light to Market Street. The theatre was very well kept and well managed. It was taken over by the Commerford chain in 1919 and renamed Strand Theatre. It was remodeled and enlarged in November 1928. It was remodeled again in 1951 to the plans of architect Michael J. DeAngelis. It had a large CinemaScope screen which was installed for the movie “The Robe” in 1953.

The Strand Theatre was closed June 12, 1980. I believe that like the rest of Market Street, it fell victim to nearby malls. The once thriving Market Street is now a shadow of its former self. The building is now used as an electrical supply warehouse.

Thanks gentlemen for your informative comments. I have been in contact with the grandson of Michael De Angelis. He has posted on the Stage Theatre CT link and has provided his email address there!

I was referring to the “before” picture. Those poster cases and fixtures are similar to the ones that were installed by Lempert’s crews in all of the Comerford theaters during that period.

The April 21, 1928, issue of Motion Picture News had an article about the Comerford chain’s plans to rebuild the Strand in Sunbury. The plans, which would have nearly doubled the seating capacity of the house to between 1,600 and 1,700 must have been scaled back.

Oddly, the article said that the project had been designed by a George Morris of Scranton. This is the first time I’ve come across a claim that anyone other than Leon H. Lempert Jr. had designed a theater for Comerford in the 1920s. I’ve been unable to find any other references to a Scranton architect named George Morris, but a 1916 newspaper item mentions a George Morris managing a Comerford house in Scranton. I suspect that Motion Picture News got the information scrambled somehow. The Strand project, like other Comerford projects of the period, was almost certainly designed by Leon Lempert.

The article noted that Comerford had taken over the People’s Theatre in 1919 and it had been renamed Strand at that time.

I’m uploading a picture of the Moller Organ Console which I own and rebuilt that was originally installed in this theatre. Moller OPUS 5214 installed 1928. I’m from PA living in South Florida and found this console in 2003 in Gas City Indiana. Started rebuilding it almost as soon as I got home (PA at that time). Humidity destroyed the keyboards as they were all warped and it had an extremely thick layer of stain on the wood. I later learned that seeing natural wood grain was not in vogue back in the 20’s. At any rate, I spend weeks sanding it down and found beautiful tiger oak wood grain underneath all that stain. I completely gutted the console and due to it’s rather large size cut 6" off each side of the console. I don’t know what happened to the original pipes from the organ (7 ranks I think) but I had intended on connecting it to my 18 rank Moller I had installed at home at that time. Shortly after rebuilding the console I moved to Fla. and had no room for my pipe organ any longer. I donated the pipes to a church and connected the 3 manual Moller using the Hauptwerk virtual pipe organ system. At any rate, wanted to post a few pictures of the console as it is today and document it’s new home for this website.

If the sister organ at the Capitol in Rome, NY is any indication, the console may have originally been stained with gold fleck.

A message to orgnyst6226. I owned and ran the Strand for a while in the 70s. If you ever decide to sell that console please let me know.

1966 postcard link, with the Strand blade sign in red in the background on the left.

The Strand doubled in size installing the Moller organ and had its Spanish architectural style when it closed and re-launched November 12, 1928.