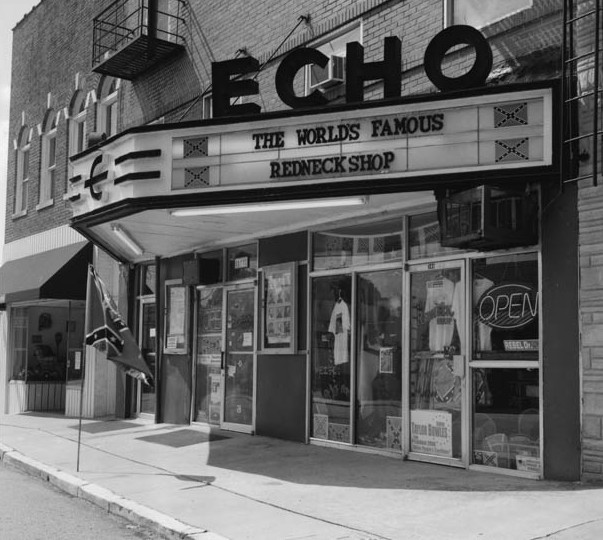 The Echo Theatre was opened around 1940. It was still open in 1955, but had closed by 1956. The former Echo Theatre became a museum/store for Ku Klux Klan memorabilia. It is now owned by a church.

I’m very saddened to learn about this theatre and how it is being used in 2012. I’m about to read the book by David Margolick, Elizabeth and Hazel. Perhaps all of us should read it and add To Kill A Mockingbird to that list of civil rights books.

I agree with Patsy. What a disgusting use of a fine old theatre.

Thanks Chuck for the good news follow-up information. Do hope and pray there aren’t any problems with the change of ownership!

NY Times article about that recent events involving this heater with a picture (subscription may be required):

This is all old news, mostly.. The Redneck shop closed permanently in about May of 2012. Google streetview still shows the signage up as of December 2012, which is the latest imagery directly looking at the building.

The location of this theater, you have to really go by there to see it, and I haven’t been by it in years. So far as I know, the church has done nothing with it. The marquee lettering proclaiming it the “Redneck Shop” was removed, that’s about it.

that’s a google street view of it from the corner, seemingly the latest image in December of 2016.

The Associated Press had a long feature article today about this theatre. There is a new movie “Burden” which will be released soon and which is about the theatre and the curious bond between its former owner (white) and the church pastor (black) who purchased it. The church hopes to open a civil rights museum there. Website: rehabhate.com

Interesting site about the history and renovation plans for the theatre: https://www.rehabhate.com/theater.html

I attended this theatre as a 5 or 6 year old to see “The Yearling,” which was released in 1946. In the mid-1960s I occasionally drove a few blocks out of my way, just to see the old theatre. So I noticed that someone made a brief attempt to reopen the Echo. I could tell that the lobby and concessions had been redone, but I do not know about the seating, screen, etc. As evidence of this reopening, see one of the photos that has “Dr. Zhivago” (released 1965) on the marquee.

Notes on the Echo Project: https://www.libertyfellowshipsc.org/news/michael-allen-14-re-designing-former-kkk-museum