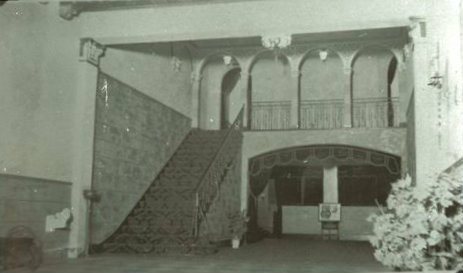 The City of Hillsboro owns this vintage theater and will soon be issuing a Request for Expressions of Interest for the renovation/restoration of the theater. The theater is in serious disrepair and every attempt is being made to bring it back to its former status as a large part of the vitality of our downtown core.

The Selection Advisory Committee recently interviewed two finalists and made a recommendation to City management to move forward with the renovation of the Town Theater/Venetian. The selected developer’s plans are very exciting and include a restoration of the theater to its glory as the Venetian operating as a movie/live performance venue and a European style restaurant. Although the project is in its infancy, there is has been a great deal of hope and excitement surrounding it.

Here is another photo:
http://tinyurl.com/29xfao

I was just by here two days ago. It is very nice inside and still has a little of the old feel. I do not like the new sign out front.
http://www.venetiantheatre.com/

It is open for movies and shows

Here is some information about the renovation:
http://www.downtownhillsboro.org/towntheater.html

This theater is back open as a theater and pub. View photos here and here.

From the Venetian Theatre website: “Until recently, the Venetian property was composed of two separate buildings. The theater portion (not including the auditorium) was originally built in 1888 to house the First National Bank of Hillsboro. In 1911, the bank moved to the Cady building on the southwest corner of Third and Main Streets. J.W. Shute, the President of the bank at that time, encouraged Orange Phelps, who was operating the 108-seat Arcade Theater directly across the street from the vacant bank building, to purchase the property. Phelps purchased the old bank building and opened the 200 seat Grand Theater there the same year. In 1916, 300 more seats were added and the Grand became the Liberty. A fire closed the Liberty in 1925. After the subsequent remodel and addition of the auditorium, it was reopened as the Venetian. The Venetian burned due to a faulty curtain motor in 1956, and the newly refurbished Town theater opened in 1957.

Phelps sold the Town to Tom Moyer Luxury Theaters in 1978. Films continued to be shown there until 1996, when the City purchased it for $1,500. It has since remained vacant until purchased by Denzil Scheller in August, 2007.

The second building on the eastern portion of the current Venetian property was constructed originally in 1887. It first was occupied by a general merchandise store at street level with a printing shop and office above. It has generally housed retail operations including grocery and flour storage, hardware, music, and most recently Faro’s clothing store. The City of Hillsboro purchased this address in 2001 from Wayne Holmes in order to facilitate redevelopment of the theater.

1946 photo as the Venitian Theater added courtesy of Dennis Belcher.