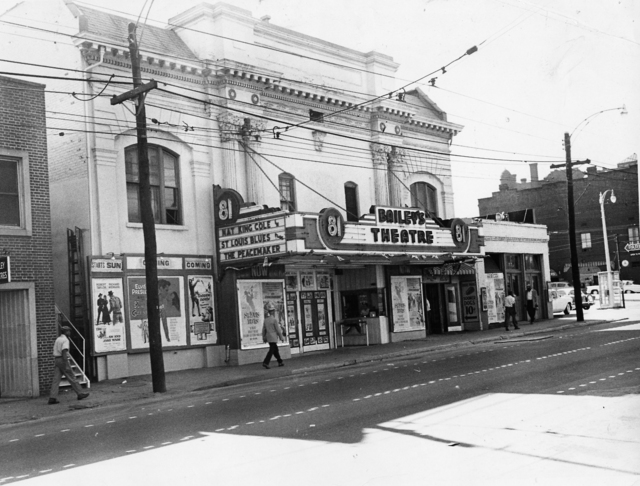 Opened as a vaudeville theatre around 1908. The 81 Theatre was the second and largest Bailey Theaters chain theatre to open in the Atlanta area. It was remodeled in 1928 and became a movie theatre in 1929. It operated as an African American theatre. The 81 Theatre was located a few blocks up from this circuit’s first theatre in the metro area, the Strand Theatre.

The 81 Theatre was closed in 1964. It has since been demolished and an office building was built on the site.

The Eighty-One Theatre first opened as a vaudeville theatre in around 1908. It was re-modelled in 1928 and was listed in Film Daily Yearbook’s from at least 1930 until at least 1955.

On June 15, 2007, the AJC had a nice picture of this theater in an article about former movie palaces in Atlanta. The article said the theater lasted until about 1965 when it demolished for the expansion of Georgia State.

During the 1970’s when I attended Georgia State, they had a series of movies that played almost everyday. Sometimes the movies were in the Student Center Auditiorum (Current Cinefest), The Urban Life Auditorium or worse 602 BA where you heard the projector in the background. This theater could have been used for that or since it was also a live theater, the GSU players could have performed there.

What is bad is thinking of what you could have done.

Actually it was a 4 rank Kimball, The console and some of the pipework still exist from this organ. I have the string and vox. For a small two manual organ it had a complete toy counter and percussion department. Graham Jackson was the first organist as well as the music director for the 81. He was also organist at the Crystal theatre just up the street which also had a small Kimball organ and that opened a year or so before the 81 was remodeled.
Graham Jackson is best remembered for the photograph of him playing the accordian at the train depot in Warm Springs Georgia when Franklin Roosevelt’s funeral train left for Washington D.C.
Mr. Jackson is also the 1985 inductie in the Georgia Music Hall of Fame.

An exterior photo and a newspaper ad suggest that this should be listed as the 81 Theatre (instead of with the number written out).

Bessie Smith is one of the many blues legends to perform here regularly.