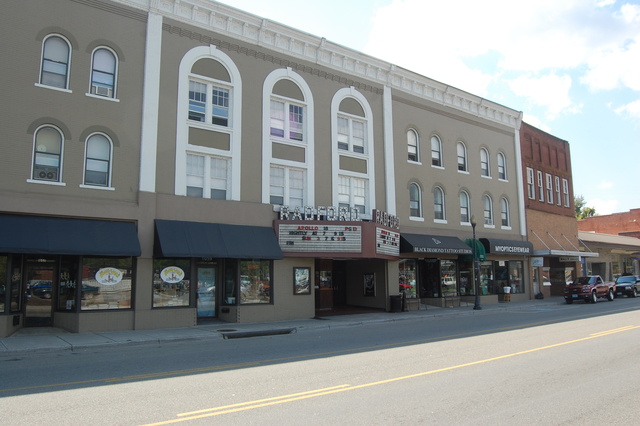 According to Google street view, Wall*e was playing in the above link. Don’t think that means it’s closed. The movie Date Night is the current showing according to several different sites.

My post from April 11th is in error. I found a showtime website showing that it is open.

Yes, it’s very much open. It still shows new releases, and is still a great theater. By far my favorite theater I’ve ever been to. Easy on my college student wallet, and it’s located right on Main St. I love the seats, and the feeling I get when I walk in. Feels like I’m walking into my living room. Very nice place.

Boxoffice of February 5, 1949, said that the Radford Theatre would reopen in about two weeks, following renovations. The major project had included the construction of a balcony, increasing the seating capacity of the house from 525 to 704.

Radford had two other indoor theaters in the late 1940s, one called the State, mentioned frequently, and one called the Virginian, which I’ve found mentioned by name only once. Both had apparently closed by the mid-1950s. Radford also had two drive-ins.

Address given is miles off. Real street address is 1043 E. Main Street.

A definite favorite of mine, my first date with the girl I married was here.