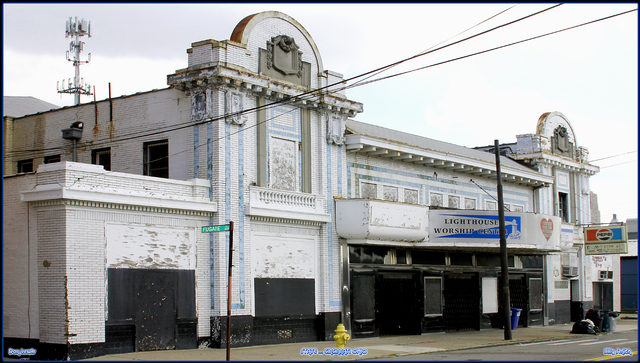 A Beaux Arts style structure which was given an Art Moderne remodel in the 1940’s stood about two blocks from the earlier Casino Theater (1913) by the same architects, Rapp, Zettle & Rapp of Cincinnati and financed by the Provident Bank. It was an early venue of I. Frankel of Cleveland who had a small string of theatres in the Cincinnati area.

It opened as the Metropolitan Theatre on December 7, 1915. The theatre had no balcony, but had a 20ft deep stage. It became an African-American movie theatre in the early-1930’s when it was renamed State Theatre. Also, big name African-American artistes appeared on its stage. It became the State Cinema in the 1960’s. In the late-1970’s it was taken over by Gary Goldman and the name reverted back to State Theatre, which closed on August 28, 1983. In October 1985 it was renamed Allison’s West End Theatre first presenting live performances and then movies from March 1986. Allison’s West End Theatre closed in 1989. It became the home of the Lighthouse Ministries church which closed on December 9, 2018. It was demolished in March 2019.

The Metropolitan Theatre launched in Cincinnati’s West End on December 7, 1915. The theatre also housed businesses including a Jewish bakery and deli. The neighborhood was evolving and the theatre held on to silent films before hosting live events including wrestling in the early 1930s.

Eventually, the theater converted to sound and became the State Theater catering to an African American audience. Other theaters competing in that space included the Roosevelt, the Regal, the Dixie, the Pekin, and the Lincoln Theatre.

While the State Theatre primarily played motion pictures it also hosted some high profile live acts including Louis Armstrong, Dinah Washington and a week by Duke Ellington. Boxer Archie Moore also made an appearances as did local favorite band Otis Williams and The Charms. The West End was vibrant and the theatre active.

But the fun was ending as the city decided to drive urban redevelopment directly through the heart of the West End. Interstate projects and convention centers were designed which decimated the African American business and nightlife areas. The Pekin Theatre was razed first followed by the Lincoln Theatre and the Roosevelt for the highway projects that would be Interstates 71 and 75. The proposed Cincinnati Convention Center project took out the Dixie Theatre in 1964. But the State Theater survived along with the Regal.

In the 1960s, the State primarily played sub-run double feature motion pictures but did have some live acts which included The O'Jays in 1968. In 1967, the venue went with a name change becoming the State Cinema. It would find new business in the 1970s during the Blaxploitation period playing films including “Blacula.”

The operator of the Regal, Gary Goldman, took on the venue returning it to the State Theater moniker. But urban renewal in 1983 caused traffic routing issues for patrons and relocated its clientele. The State Theater’s run ended on August 28, 1983 with the film, “Let’s Do It.” In 1985, Frank Allison made one last run with the historic venue. He relaunched it in October of 1985 as Allison’s West End Theatre starting with live music and converting to motion pictures in March of 1986. The theatre went out of business in 1989 and was offered at a Sheriff’s Sale later that year.

The Lighthouse Worship Center took on the property. in 1990 and helped it to reach its 100th anniversary in 2015. But in 2018, the theatre was targeted for demolition in favor of the West End Stadium to house the local professional soccer team. The last services were held in the historic Rapp & Rapp designed venue on December 9, 2018 – 103 years and two days after the very first film played there.

This is another of the Cincinnati theatres that I occasionally heard about and would have loved to visit but they never posted showtimes in the paper. Gary Goldman must have really hated the press. Can anyone approximate a list of what played here and when?

Gary Goldman ran this for 5 yrs. my family sold to him. My grandfather and father had it since the early 60’s until 1984.

That’s illuminating information, Mbeino - do you have any ads or other promotional material from when your dad and granddad ran it? Since they rarely did newspaper ads, I’m dying to know how they got word out about their bookings.

i don’t have any movie ads. Unfortunately, when my father passed, I got rid of all the old posters. The movies played were second run, Bruce Lee, horror and some geared to the African American audience like, Blackula, and Mandingo. I personally was ruined by Jaws! I have some articles about “Bein Theatre’s” and some awards my father got for his contribution to the neighborhood. I’m not sure how I can share to this article. Any idea?

Marci, if you can scan any of that material, you can upload the jpegs as images in the photo gallery. Do you have any pix of the interior during that time? Since they didn’t list in the newspaper, did they print flyers for the neighborhood shops? Like, obviously people in the immediate vicinity would see the marquee and know what’s playing, but was that enough to draw substantial crowds for a given booking?

i only have some newspaper articles about my family’s holdings of Theatre’s and some awards my dad received. As far as I know there was no advertising aside from the Marquee and posters. I was a young teen when it closed (about 13). I will get out my scrap book and try to upload some things I have.

i found this article, Phil was a friend of my father’s. My father was an investor in “Harper Valley PTA,” and “Chattanooga Choo Choo”.I was on location for 3 days of filming of “Harper Valley PTA” filmed at Lebanon HS. https://www.bizjournals.com/cincinnati/news/2020/04/17/philip-borack-producer-and-longtimefilm.html

I never got to meet Phil, but I was always grateful to him as the “silent partner” behind The Movies repertory cinema downtown. I recall he invited investors to participate in his movie projects in their calendars. He also ran April Fools Distribution, who handled the Pink Floyd at Pompeii concert film.