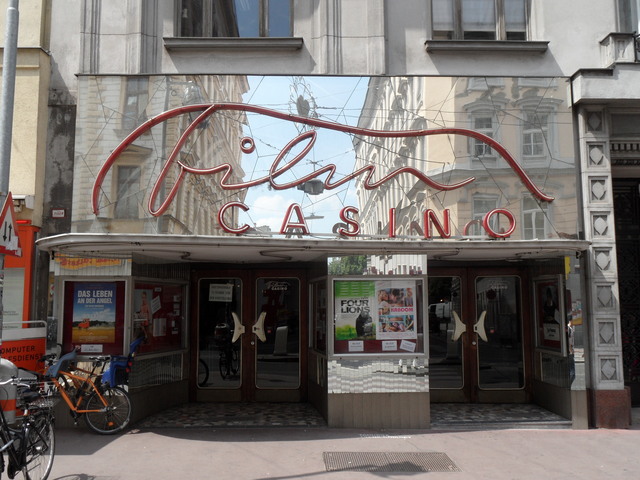 Established in 1911, the Filmcasino is among the oldest cinemas of Vienna. Redecorated in 1954 its fancy 1950’s design has been preserved ever since. The prominent neon sign of the facade as well as the characteristic curved walls of the lounge and the jungle motif panelling alongside the bar are trademarks of the Filmcasino and are responsible for its congeniality today. The cinema was gently refurbished in 2006 when a contemporary system of lighting has been added to the original. The Filmcasino is part of the Europa Cinemas group.

In its programming the Filmcasino focuses on the European cinema, films from Asia and US independent productions. All films are shown in the original version with subtitles (an exception in Austria, where the mainstream films are dubbed).

Beside the daily program, the Filmcasino offers a variety of special programs and tributes to outstanding filmmakers and has welcomed guest such as Michelangelo Antonioni and Billy Wilder.

Lobby and exterior photographs (27) from February 2013.