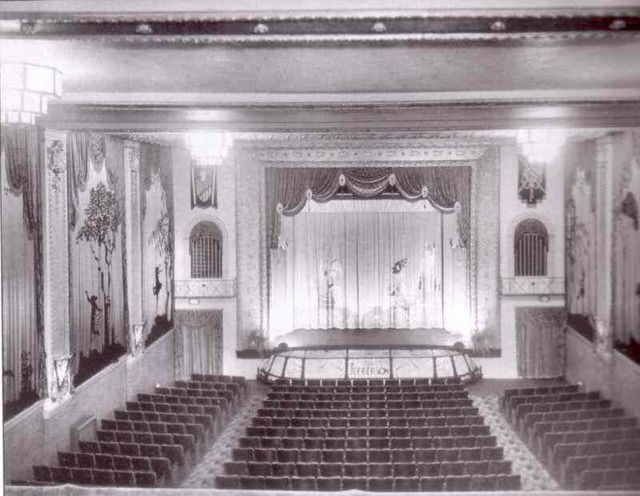 The Jefferson Theater opened March 28, 1910. Following a remodeled it became the Paramount Theater from February 8, 1915, but that was short lived as it closed June 21, 1915. It had reopened as the Jefferson Theater by 1920 and closed and and was demolished in 1977.

I’ve got a shot of the interior from the OLD ROANOKE website showing how ornate the place was before a “modernization” dulled down the place.I saw a lot of movies there before it became a vacant lot.1776 was probably the most memorable.It made a good companion for the larger,el grande,American two blocks North.

Up the street and around the corner on Campbell Ave.were 3 other grand to near-grand theaters that are largely forgotten.Those were the Music Acedemy,Rialto and HUGE Roanoke theater.There are pictures availible,if MR MEMORY,the all seeing wizard could get them.I got them from TWIG of old Roanoke site.He has a rich stack of old theater pictures.The 3 mentioned were gone by the late 50’s.Why?The destruction of the Jeffereson was totally senseless.I am told by one OLD timer,that back in the 1st half of the 20th century,people would find the theaters on Campbell Ave.and the American,very handy for those times when they were changing trains in Roanoke,or spending the night to catch a train out the nxt.day.Roanoke’s railroad heritage is a rich one.

Notice the first pic is the outside entrance to the massive,double balconied Roanoke Theater.Wish I could find out more about it.

In 1963, the Jefferson was part of the Craver Theater chain, S.W. Craver owner and general manager. Other Craver theaters were the Grandin and Lee in Roanoke, the Academy in Lynchburg, the Lebanon in Russell, VA, the Cayce in Cayce, SC and the Charlotte in Charlotte, NC.

This 1995 article states that the Jefferson was razed in 1977, and that a state liquor store is currently onsite:
http://tinyurl.com/32ua9p

This is probably the ca.1911 photo of the Jefferson Theatre that was on the web site linked earlier which has gone missing. The photo must have been taken no earlier than 1916, though.

Here is an item from the February 19, 1916, issue of The Moving Picture World:

“E. D. Hines, of Roanoke, Va., who recently took over the Paramount theater in that place, has changed the name of the house to the Jefferson and is now running a picked program of features with an admission charge of fifteen cents.”

The Paramount Theatre is not listed in the 1915 Roanoke City Directory (which would have been published in late 1914 or very early 1915), so the house must have operated under its original name for a fairly short time.

The 1915 Directory does list three movie theaters in what was then the 300 block of S. Jefferson but has since become the 400 block: the Bijou Theatre at 303 Jefferson, The Virginian at 305, and The Comet at 307. If all three survived until the Paramount opened at 317, four of Roanoke’s five movie theaters would have been on that one block, all on the same side of the street.

The buildings that housed the Bijou, Comet & Virginian are still there but other business are in them including a bar where the Comet was. They were very small without a stage & balcony. Others this side were the Electric Parlor, Lyric, Isis & Princess on Campbell Ave.

The Jefferson opened in 1910 and closed in 1977. I worked there for several years for Carver Theaters and the manager was George Mann. Also I worked at The American for Billy Fox who was only the second manager the theater had. I was a doorman & usher & gofor. I loved to work the first shift on Saturday so I could turn on all the lights on the two switch boards under the stairs leading up to the mezzanine, ladies room & lower balcony entrance. The Manager’s office was in the middle of the mezzanine w/ the men’s room on the opposite (Kirk Ave) side.

The Roanoke Theater was the second largest in Roanoke & seated about 1260 white & about 200 black patrons in the second level balcony. (Larger than the old Academy of Music in the 400 block of Salem Ave.) It also had box seats far right & left downstairs & at the first balcony level. The entrance was on Campbell Ave on the southside of the street not far west from Jefferson St….just beyond the First National Bank & a 5 & 10 which later was a drug store & now is a closed night club & bar. The actual auditorium was on Kirk Ave next to the American theater. The American, built in 1928, used the rear house wall of The Roanoke for it’s rear stage wall. And the Roanoke, built originally in 1911 for stage shows, had a larger stage with more wing space than the American but the house was smaller & the lobby was nowhere near the size and opulence of The American. There were exit doors that opened on Kirk Ave on all three levels with the upper two having a green fire escape. From 1911 to 1928 the Roanoke was cooled by fans but the huge AC system in the basement of the American was piped into the Roanoke via duct work that ran from the roof of the American through a hole in the common wall the two theaters shared. The Roanoke closed in 1961 & was razed. The Rialto in 1955 & The Park closed in 1956 wasn’t torn down until about 1962. It did not have a balcony but did have a side exit door that led to an ally that ended up on Franklin Rd near H. C. Baker.

I should have written the entrance of The Roanoke Theater was on the southside of Campbell Ave just west of Jefferson St just beyond the First National Exchange Bank (now Wells Fargo) and BETWEEN THE BANK AND THE 5 & 10 that later was a Peoples Drug Store & now is a closed night club & bar. The auditorium of the Roanoke was right behind that building on Kirk Ave and was between The American and the read entrance of Woolworths on Kirk Ave. The Roanoke’s rear house wall was used as The American’s real stage wall, so when the Roanoke was torn down in 1961, they had to leave that wall & one could still see the rear house paint & light fixtures for the Roanoke at the lower level & both balconies. That wall was finally torn down in 1973 when The American went. The rest of The Roanoke site became a parking lot which is still there on Kirk Ave. If one walks down the ally between the parking lot & the old Woolworth building, there is about 15 feet high of the Roanoke Theater wall left in the back facing the rear of the building that use to house the People’s Drug store. If you look carefully, one can still see where the under stage dressing room windows use to be and the bottom of a stage exits and house exits down the rear ally. What is left of that wall, was build in 1911, the year the theater opened. Originally the Roanoke was stage shows only and was on the old B. F. Keith circuit. But even well into the 1950’s, stage shows were often at The Roanoke, booked by Mr. Hines usually on Wednesday nights. I remember we had The Three Stooges on stage at the Roanoke in the 1950’s and kids packed the theater. Also when the movie at the American was a big smash, Hines would have The Roanoke Symphony play it’s monthly concert at The Roanoke rather than The American. The last time I remember that happening was in 1957 or so.

Just posted an ad dated March 28, 1910 announcing the opening of the Jefferson