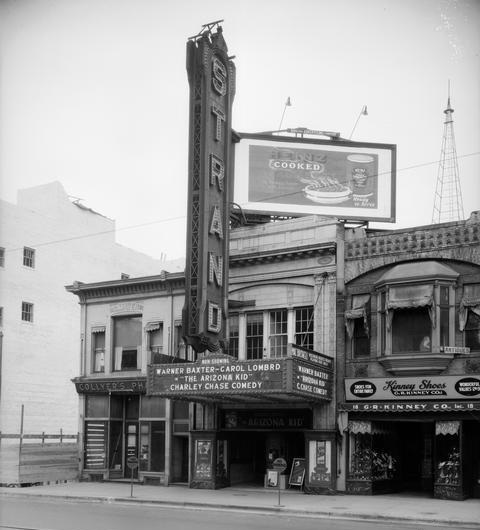 The Strand Theater was closed and partially demolished in 1990, with the rest of the building coming down in 1996, and the marquee was given to the Wisconsin State Historical Society. An office building is at this location now.

The Strand Theater was built in 1917 and opened in 1918. It was designed by architectural firm Rapp & Rapp. A 4-manual, 11 rank Wurlitzer organ (Op. 1520) was installed at the Strand Theater in 1926 and removed to a church in 1942. The organ has since been combined with another instrument and is now owned by the Theatre Organ Society of San Diego.

This was an approx. 1100 seat theatre, not 400 seats! The Strand was a single level theatre (no balcony) with all seating on the main floor. It also had a large screen, especially for widescreen films, as I recall, the screen was around 54ft. wide by 28ft. tall for “Scope” films, never had 70mm. There really wasn’t a bad seat in the house, no obstructed views, great sight lines. This was also the first theatre in Madison to install Dolby Stereo, for the original Star Wars film, which ran here forever. Here’s some trivia, this was also the sight of a Nickelodeon called “The Amuse”, the Amuse occupied what was the very long lobby of the later constructed
Strand, till it was demolished you could go into the basement stairwell, look up, and see the projector ports for the Amuse! The theatre was torn down to make way for (what else!!)an office
building. At the end of it’s life it was part of the Madison
20th Century Theatres chain, which was part of Dean Fitzgerald’s Capitol Service Co. of Milwaukee, WI.

The last film shown at the Strand was “Internal Affairs” in the autumn of 1990. The auditorium was torn down almost immediately for a new multi-level parking garage. The facade and lobby remained for a short while after. The (then) State Historical Society of Wisconsin salvaged the marquee and carried it away on a huge flat-bed truck.

Here is an October 1931 ad from the Madison Capital Times:
http://tinyurl.com/qm82ys

any body know anything about what happened to the guy who used to manage the theater? Robert Carlson, I believe?

The Strand was one of several Madison theaters built by Dr. William G. Beecroft, a local dentist. Beecroft was also the owner of the Amuse Theatre, which was converted into the Strand’s lobby. Reports about Dr. Beecroft’s theater project on East Mifflin Street began appearing in financial and construction trade publications in late 1917, and continued into early 1918. Several of these items say that the project was designed by Rapp & Rapp.

An item in the November 24, 1917, issue of the Chicago business journal The Economist confirms that the theater at 16 E. Mifflin Street was designed by Rapp & Rapp. The contract for concrete work on the project had just been awarded to William Oakley of Madison.