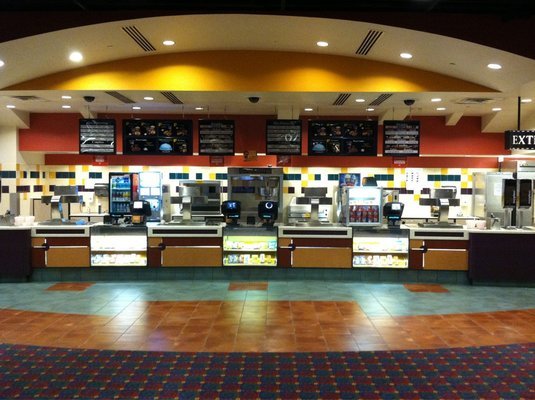 Opened in May 19, 1999, this theater, along with the Cherry Hill location, has the most number of screens (24) in the Garden State.

IMAX now at theater near you
Times of Trenton 9/27/08
HAMILTON — The future is here. In fact, you can practically be surrounded by it.

Central New Jersey has its first IMAX theater at the AMC Hamilton 24 on Sloan Avenue.

The theater, known for its giant, curved screen and surround-sound system that gives the viewer the feeling of being in the middle of the action, marked its turf with a splash yesterday with the opening of the high-tech, high-octane thriller “Eagle Eye.”

The IMAX theater in Hamilton is part of a partnership between the nation’s second-largest movie theater chain and IMAX Corp. to install digital IMAX systems in 33 markets nationwide through 2010. It was installed over the summer along with IMAX systems at AMC multiscreen theaters in Neshaminy Mall in Bucks County, Pa., and in Cherry Hill.

“We looked at some of the top-performing theaters across the country and made the selections based on where we thought the auditoriums would be a good fit,” said AMC spokesman Justin Scott, who would not disclose further box-office details.

The digital system differs from the earlier-generation IMAX, which utilizes multiple reels that need changing; the new system has no reels.

The IMAX theater at the Hamilton complex can accommodate 375 people.

Each IMAX screen and digital sound system is customized to the theater in which it will be placed, according to Scott.

The screen at AMC Hamilton is 58 feet wide by 33 feet high, whereas the screen at Neshaminy is approximately 59 feet by 27 feet, he said. “What generally happens is the screen is about 25 percent bigger than in regular auditoriums,” Scott said.

Part of what is driving this explosion of IMAX screens around the nation is content.

Future digital IMAX offerings will include the animated “Madagascar 2: Escape to Africa” in November; “The Day the Earth Stood Still” in December; “Night at the Museum 2” in May; and the next installment of the Harry Potter movie series in July.

Moviegoers who get motion sickness from the “you are there” sensation of IMAX can opt to view the same movie in a regular theater of the complex, Scott said.

Tickets for the IMAX version cost $3 more than regular prices, which range from $5 to $9.75.

The presence of an IMAX system can be an attraction for theaters, especially in a year when attendance has declined.

According to the California-based box-office tracking service Media By Numbers, attendance for the lucrative summer season — from the first weekend in May to Labor Day weekend — was down 3.5 percent from last year, with 586.8 million tickets sold compared with 608.1 million last year. For the year to date, attendance is down approximately 5 percent from 2007.

However, in terms of pure dollars, this summer season was the best ever, with films such as “Iron Man” and “The Dark Knight” helping the industry pull in $4.2 billion compared with $4.18 billion last summer, a minimal increase.

The economic downturn is part of the reason attendance is down, said Paul Dergarabedian, president of Media By Numbers.

“It’s definitely taking a hit on attendance right now,” he said. “Typically, we believe the movie industry is recession-proof. … In these times people are not hesitating to spend $10 on ‘Dark Knight,’ but they might become a little more selective with how they spend money on films in general.

“When people are worried about their mortgage payments,” he said, “they may not see as many movies as before.”

But although regular theaters may be putting fewer people in the seats, the IMAX theaters are still doing well.

“They have so distanced themselves from that notion that they are just about documentaries,” Dergarabedian said.

“Regardless of the overall market, their attendance is up,” he said. “The kinds of film in IMAX, they will pay a premium for those kinds of event movies,” he said of moviegoers.

avatar special edition 3d in imax and 3d this weekend.

May 19th, 1999 grand opening ad from the Philadelphia Inquirer in the photo section.

Dolby here is 1.85:1 and felt quite small. Relatively shallow seating incline probably doesn’t help. Hopefully the new IMAX Laser setup has Dolby seating, otherwise I can’t see myself returning to this theater since both Rockaway and Fashion District have superior 1.85 Dolby theaters. On the plus side, the theater was clean and staff was pleasant.

IMAX LASER is now open, it has 293 seats