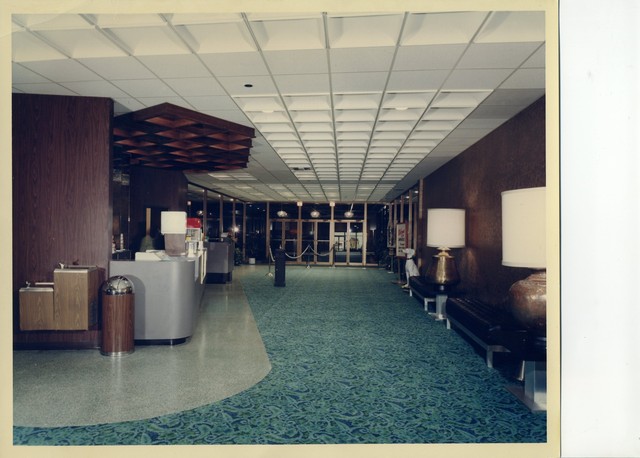 Located in the Lawrence Shopping Center, this theater was built in the late-1960’s/early-1970’s. During the 1970’s, it was the place to see the big movies such as “Star Wars” and “Alien”. It survived the initial competition of the nearby newer mall theaters but eventually closed in the early-1990’s. The theater has been converted to additional retail space.

This was THE movie theater in the early eighties they managed to get almost all the big blockbusters: Raiders of the Lost Ark, Rambo II, Return of the Jedi, Temple of Doom, Rocky IV. I know I also saw Broadcast News and Day of the Dead here. I think they also had For Your Eyes Only.

It was the farthest neighborhood theater from central Princeton. But it was the only one showing some of the biggest movies.

This theater (and the Garden Theater in Princeton – also an Eric theater at the time) got crushed when the UA Movies at Marketfair opened in 1987. At first the Erics showed the same movies playing at other theaters. I guess hoping to attract local customers only.

The Garden probably survived because of its proximity to the University (who now owns it).

When I was seven years old, in 1977, it was a hot summer in New Jersey. Our home had no air conditioning back then, so the family decided to go to the movies to escape the heat. I remember the drive down to Lawrenceville in our dented brown Plymouth Satellite and the welcoming doors of the Eric Twin theater. I had never heard of the movie we were going to see and my father only picked it because a coworker told him it was good. Little did we know that the Eric Twin would become forever cemented in our memories as the place we saw the most important film in history, George Lucas’s “Star Wars”.

I saw Star Wars here on opening night in 1977. Will never forget it. I also stood in that long line for Return of the Jedi on opening day. Others I saw here include Airport 77, Silverstreak, For your eyes only, and Goodfellas, which must have been near the end.

I was driving home from Maine the other day and decided to take a short cut down rye206 thru Princeton. Driving thru Lawrenceville got me feeling a little nostalgic. I was the Manager/Operator for this twin house for several months in 85/86. I was from Bucks County so this was a bit of a drive. I stayed here until another twin house closer to home opened up, another Eric theatre in the Lincoln Plaza next to the Oxford Valley Mall. It was a long time ago and I think I remember my crew more than the movies I showed. But I do remember “Short Circuit” being a big deal. Its still one of my favorite movies. Good Times. :)

I’ve added 2 photos to the gallery. Not absolutely sure they are this cinema, but probably are.

It is the Eric Lawrenceville Theatre. It is an exact replica of the Eric Concordville Theatre, with a few difference, including the entrance is the reverse of the Concordville. The small marque under the “ERiC” sign looks like was added after the theatre was twinned.

I setup an account for this site just to comment on this theater. I was amazed to find a photo and commentary on this one. Its a Retro Gym now but for the life of me I always recalled it being a movie theater from when I was a child. I could never confirm it with friends and family and who didnt believe be because the structure is so small. But indeed it was a theater. I saw some movie there perhaps ‘Harry and the Hendersons’ with friends of my family. I distinctly recall the shopping center as well which I think had a ‘Dunhams’ which is now the BCF.

the memories, location is incorrect but I remember watching Super Mario Brothers and after the movie you got a chance to get a movie ticket for free if u got the furthest into the game without giving up a life. Where does the time go.

Realgone222 nobody believes me it is a theater either lol