Celebrating the Original STAR WARS on its 35th Anniversary 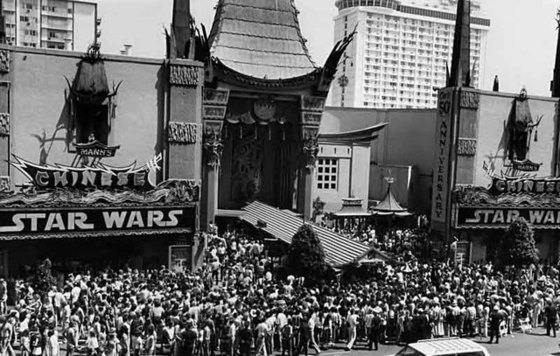 A long time ago in a theater far, far away….
Celebrating The Original STAR WARS On Its 35th Anniversary

Wow! Has it really been thirty-five years? Where has the time gone? It seems like only a short time ago that George Lucas’ endearing space fantasy caught the world by surprise.

A lot has happened over the years in regard to STAR WARS, and for a lot of people the STAR WARS saga and George Lucas have worn out their welcome. There is no denying, however, that there was a time when STAR WARS was fresh and exciting and had inspired a generation. That time began thirty-five years ago today. To celebrate, presented here is: (1) a list of the theaters where the movie played during its first week of release (to honor those venues famous for being among the first anywhere to show the landmark movie), and (2) a list of the theaters where the movie played for more than one year (to help illustrate the movie’s staggering success).

The presentation formats cited are the opening-day format. Many of the theaters changed format during the course of their engagement.

Additional engagements were added weekly throughout the run of the movie, peaking at about 1,100 simultaneous engagements during August. Ultimately, there were over 6,000 engagements of STAR WARS in North America and hundreds more internationally during its original theatrical release.

THE LONGEST-RUNNING ENGAGEMENTS OF STAR WARS

Listed below are the North American theaters where STAR WARS played for more than one year. (One movie in the same theater for a year! Seems incomprehensible by today’s standards, doesn’t it?) Many of these figures hold today as the all-time, long-run record.

There were numerous markets in which STAR WARS played over one year by virtue of a moveover from one theater to another. These cases have not been cited in this article (except for one unique example explained below).

By the end of its run, STAR WARS eclipsed countless box-office records and became the movie industry’s highest-grossing release (a feat it held until its take was surpassed by E.T.). Adjusted for inflation, STAR WARS today ranks in the all-time top five.

You are invited to share your memories of the original STAR WARS on the occasion of its 35th anniversary!

Another nice post, Michael. Thanks. As I was six at the time of its initial release, I can’t remember whether I saw Star Wars at the City Center in Orange, CA opening weekend or later at the Big Newport. Somehow the City Center feels right. Wherever it was, I definately remember it as the day I fell in love with power of pure cinema. That love burns brightly in me to this day and will most likely never fade. For that I offer thanks to George Lucas, John Williams and my mom, who not only indulged my every Star Wars whim for the next six years but made sure cinema remained a constant in my life going foward.

And I was at the Esquire in Chicago on Friday May 27th, 1977. One of my greatest movie memories.

Grauman’s Chinese. Not opening day, but opening week. Tuesday or Wednesday afternoon. Sat almost on the very end of the left side of the theatre, maybe seven rows from the screen. The greatest movie moment that nine year old boy had to date. Saw it at least fifteen more times that summer.

As chance would have it, one of my friends from school was one of the first families to have a VHS player, and somehow his dad had gotten ahold of a top-quality bootleg tape of Star Wars. He lived right across the street from school, so every day after school for an entire year, we’d rush over to his house and watch Star Wars. We easily watched it three hundred times.

Over the years, I’ve had copies of the original 1984 CBS/Fox VHS release, the 1993 Definitive Collection laserdisc and the 2006 Limited Edition DVD, and I will not be buying the Blu-Ray or any other future edition unless it includes a new hi-def scan of the original movie I saw at Grauman’s Chinese in 1977.

“ … I will not be buying the Blu-Ray or any other future edition unless it includes a new hi-def scan of the original movie I saw at Grauman’s Chinese in 1977.”

I’m with Edward on this. We’ll probably never get it, but we still have our memories and George Lucas can’t wipe those out.

The Janus Theatres in Greensboro played STAR WARS for an impressive 64 weeks running until September 1,1977. The other long running city was the Charlottetown Mall Cinemas that played it for 46 weeks. Other cities in North Carolina didn’t get the film until July 1,1977 in selected cities throughout the state.

I have the original list to where STAR WARS played first-run in North Carolina. Not to mention it’s list of re-release dates from 1978. I would be glad to sent you this.

My dad first saw star wars in Paramus with a bunch of friends. He loved it so much he went to see it multiple times with other friends and relatives, including me, when the film was rereleased for the last time in cinemas in 1997 in the ugly special edition. That edition will be enchanced for 3D three years from now when it returns to theaters for a limited engagement.

Yup! I, too remember seeing Star Wars when it first came out, back in the summer of 1977, here in Boston, at the now-defunct Charles Cinema. It was a family outing, and we all enjoyed it. I hope to see it again, if and when it comes to our neck of the woods for its 35th Anniversary.

I saw it at the Valley Circle in San Diego, sometime during its first two weeks of release. A good memory…my Dad driving the family to the Mission Valley area, pretending we were going out to dinner, then surprising us by pulling into the theater parking lot instead. By the time we’d bought our tickets, the line had already wrapped once around the big box-like cinema; when we got inside, we bypassed the crowded snack stand and went straight to the big auditorium, where plenty of seats were still available. We sat on the right side, at the end of a row, and there on the floor we found a full tub of popcorn that had been left behind from the previous showing, a free snack which my brother and I both made an immediate wide-eyed grab for (I was 14, he was 10). My Mom saw this and nearly had a heart attack; she stopped us with a panicked “No!” and immediately sent Dad to buy us a fresh tub! A great show on a giant screen, with an enthusiastic audience around us; I wound up seeing the movie four more times during its initial run.

I started work as an usher/doorman in June 1977 at the GCC Woodbridge Cinema, but after a month ended up 5 miles down the road at the Menlo Park Twin, where Star Wars was in full gear. I remember the endless lines that snaked back to the park a few hundred feet away. But the one thing that amazed me was in December, on the saturday before christmas, in its final week, as we were opening “Close Encounters” the following week, this movie sold out all 4 shows for the day, filling all 800 seats in the theatre. For me, an 18 year old, who was also learning and doing part time projection, this is something I shall never see again. Truely a great time in our industry.

Star Wars opened in Huntsville, AL on May 27, 1977 at the University Six theater, which had just opened. I didn’t get to see the movie until the first or second week of June, but from then on, I went to the Saturday 1pm matinee showing every week until they stopped presenting it. I kept every movie ticket and never missed a Saturday. I have 79 movie tickets from that first run, so I know it played over 79 weeks in a row. I also have newspaper clippings of the theater ads touting the long engagement boxed up with the tickets. The University Six is closed now, so there is no one I can contact for any specific dates. I was surprised that this run did not make your list.

dhatch01… STAR WARS opened in Huntsville on June 17th. It ran 25 weeks. The University was a four-plex at the time.

I saw Star Wars in Winona, MN. I was only 7 at the time and I remember my Dad coaxing me to go see it. He showed me a small theater ad in the paper that showed R2D2 and C3P0 and said, “See, it has robots in it!” I reluctantly went along. The theater was bare two minutes before show time. My Dad said, “There’s hardly anybody here, I wonder if their still going to show it” Needless to say, I was blown away. My Dad probably wishes he never should have taken me because I haven’t stopped talking about it 35 years later. Oh, and by the way. The next year, Star Wars was replaying at the same theater. The line was rapped around the block. I remember that as well because I was waving to my sister across the street who was waiting in line to see Grease.

Coate, you may be right about the opening date in Huntsville, but Star Wars ran for at least 79 weeks in a row. I never missed a Saturday 1pm showing. It might have ONLY been showing on Saturday matinee after 25 weeks, but it was not pulled completely for over a year.

I was too young when the original film came out, but i did see the 1981 re-release at the AMC Premiere Twin Theatre (which is where I saw the 70mm release of the Empire Strikes Back in May, 1980)

Thank you so much. I was looking through different search quires for hrs. Wow, it really smashes my childhood memories, I would have bet the bank it was a Wednesday and May 25th opening. I just couldn’t figure out why everyone was out of school. It’s makes me wonder how precise my other childhood memories are : ) I was 15 and that day is a day of many moving moments that going to see Star Wars was the catalyst . I will try and share that day sometime soon.

Great photo and great post. I saw the 70mm version at the now-gone Loew’s Astor Plaza on 44th street in NYC. Although I didn’t see it right away – I saw it after “Close Encounters” so I probably didn’t see it until around December of 1977. That would be impossible today – no film would play that long.

i have found one of the best portal for information i was looking for. impressive. https://veteransdayclipart.com/

You are writing some Amazing tips. This article really helped me a lot. Thanks for sharing this blog. Best Kitchen Chimneys in India

You are writing some Amazing tips. This article really helped me a lot. Thanks for sharing this blog. Best Bluetooth Speakers in india

It really is amazing that Star Wars has been around for over 40 years. Truly amazing story that everybody loves. indigoapply.com

You made some decent points there. I looked online for that problem and found most people goes coupled with with all your website.

This post has some really wonderful insights and interpretations in it. Be sure to keep writing more great articles like this one. ramadan mubarak wishes