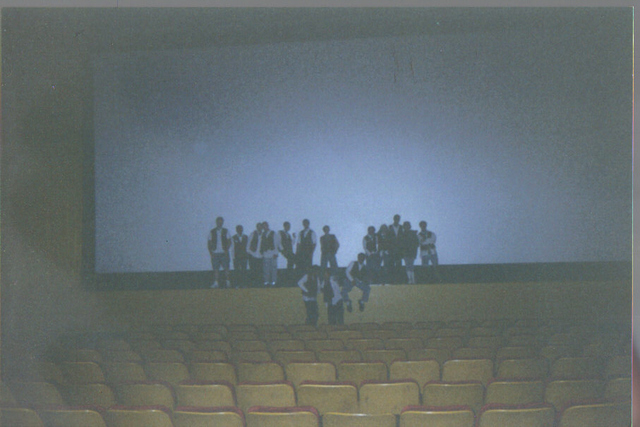 June 19, 1969 marked an important date for the the Wehrenberg Theatres chain. It was the opening date for for the Creve Coeur Cine'. The decor was Art Modern in style, but much more ornate than other cinemas that were opening. It was considered the 1960’s version of the movie palace. The lobby had a mirrored wall opposite a wall that was all glass. A Renaissance statue stood against a wallpapered wall. These all surrounded the central concession stand. Above hung an inverted pyramid, 500 pound, tiered chandelier with 2,000 Austrian crystals.

In the auditorium was a curtained wall that extends across the theatre. this unusual feature took over 1,000 yards of gold foil. The facade was of crystal amethyst imported from Ontario, Canada. This brownstone with slivers of purple was popular while the theatre was being built.

At the time that the Creve Coeur was built it was one of the largest modern cinemas in Missouri. As compitition from the multiplexes close to the Creve Coeur the theatre was divided into two screens.

In 1998 when AMC built a 16-plex a few miles down the road it marked the beginning of the end for the Creve Coeur. The theatre closed in September 1999 and was demolished soon after.

Just out of curiosity, what is now on the site of where the Creve Coeur Cine used to be?

Oh my…in that Boxoffice article is the pre-split auditorium where I first saw Star Wars, The Empire Strikes Back and Fantasia. My my my!!!

One regret that I have is that I never made it to the Creve Coeur. Really wish I had

My all-time favorite cinema! Its original one-auditorium configuration was so sweet! Favorite memory was in 1977. We went to see “Star Wars.” Creve Coeur was one of the 43 original cinemas to show it. We went for the 7 p.m. or so showing. It was sold out. So, we got tickets for the next showing, went across to Schnuck’s for some ice cream. We came back, sat on the floor with everyone else and had some popcorn while waiting for our showing to start. We had a blast, and spent the rest of the summer telling everyone about the movie!

Tons of other great memories here, too many to mention! Beautiful auditorium with pitch-perfect 70mm projection and 6-track Dolby Stereo sound!

The Creve Coeur was an awesome place to see the biggest films in the late ‘70s and early '80s.

There’s a flashback scene on an episode of “The Simpsons” where Homer walks out of “The Empire Strikes Back” and spoils the ending for the line of people waiting for the next show. That actually happened as some friends and I were coming out of the Creve Coeur on opening weekend. (I swear it wasn’t us!) We were walking to our car when we heard some jerk behind us deliberately yell at the line of waiting people, “Hey everybody! Darth Vader is Luke Skywalker’s dad!” We then heard someone in the line yell, “You son of a b——!!” We got to our car and got out as quick as we could before a riot could start.

I also have a vivid memory of going with two girlfriends together to the Creve Coeur to see “Alien.” It had just opened, we’d only seen the vague TV commercial and knew nothing about the movie. I was so freaked out by the movie, the two girls had to help me walk out of the theater. We got to the car, got in, then sat there without speaking for a moment. Then I dazedly suggested going somewhere for a bite to eat, and the girl in the back seat said, “Someplace well lit.”

New Showcase Presentations in St. Louis article includes a chronology of the 70mm engagements here at the Creve Coeur (and other St. Louis area cinemas).

Only went there twice. Once for Star Wars, once for Empire. Since I was, at the oldest, 6 or 7, I don’t remember much abou it. Other than it being the first time I exited by the screen, and saw the credits in reverse from the other side.

Saw quite a few classics there when I was a kid in the mid to late 70s. Jaws, Airport ‘77, Star Wars, Invasion of the Body Snatchers, Alien, and The Empire Strikes Back. What a beautiful, grand theater it was. I miss the days of a big house with such a huge screen.