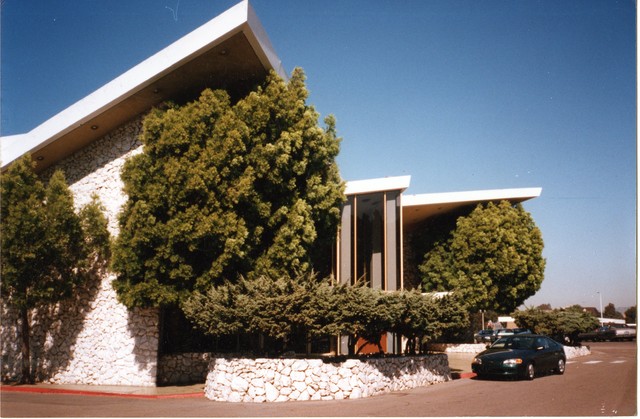 A single screen theater in the Mission Valley section of San Diego. One of three in it’s heyday (the other two were the Center and Cinema 21). Anchored the Mission Valley West Center before its demolition. Opened by National General Theatres on December 23, 1966 with Peter Sellers in “After the Fox”. The theatre had 922 seats, all on a single level. It was closed and demolished in early-1998.

I saw Star Wars in this cinema, and it my first taste of a Hollywood “blockbuster.” I remember the lines around the theater, the excitement, the chatter and high spirits, and I had NEVER heard an audience react like that in front of a movie-screen. I thought I was at a football game, sometimes for all the cheering. The theater itself was relatively nondescript, but the memories are not!

What great memories. I too worked at the Valley Circle for about two years. I was hired on as a high school senior for “Star Wars”, and I stayed through “Starting Over”. The Star Wars run was incredible. Sold out solid for months on end, and then those crazy midnight shows. We had to borrow staff from other local Mann theaters. We were robbed at gunpoint one Saturday night after the midnight show began. A couple of us were slightly injured. We also hosted a few “sneak previews”, I remember Barbara Streisand attending one of her movies being previewed. It was a great time for me, nothing but very fond memories. Oh the movie memorabilia I collected from here that I should have kept!

SORRY nEEB, yOU SAID THAT oLIVER WAS NOT IN 70MM. dO YOU MEAN AT THIS THEATRE OR ANYWHERE.Columbia made 70mm blowups and they played them in a lot of big city theatres like L.A., N.Y. SF, Chicago and others.

I have been to this site in awhile. Having been a usher from 1969-1973… regarding OLIVER!..I saw the 35mm film with the projectionist. He was disappointed that they did not get a 70mm print. Back then San Diego was not a big city and to see OLIVER! in 70mm one had to drive up to LA… The projectionist also turned off the surrounds because they had a “whistle”. I had to sell hot dogs at intermission while holding the souvenir program and the page opened to Fagin holding a sausage …embarassing! I also remember “FORTUNE AND MENS EYES..The manager was very upset showing that film…:–). The weeks of BOB AND CAROL AND TED AND ALICE and also MASH…the theater was always packed with long lines outside. It did not matter how many times I watched it, the laughter was infectious.

Can I get confirmation from someone who may have been working at this theatre when it showed the Sneak Preview Cut of Logan’s Run on May 7th 1976?

Why didn’t this theater show ET and Titanic during their runs? Those movies torched Star Wars as the top blockbusters of the 20th century!!!

Moviebuff82 – As the newest single screen in Mission Valley, the Valley Circle was actually booked in 1982 with what the pundits predicted would be the biggest hit of the summer: “Poltergeist”. However, as is so often the case, the pundits were dead wrong. “ET” was booked at the much older and at-that-time rather rundown Loma (which had “ET” as an Exclusive San Diego Area Engagement). Once it was obvious that “ET” would be the movie of the year, Mann Theatres did some quick remodeling to improve the Loma. They couldn’t very well take “ET” away from the Loma, that would’ve been unfair to the theatre’s manager (Mann managers then earned a hefty snack bar commission). But the Loma, while older, was a fantastic house and played “ET” for forever. BTW – “Star Wars” well outpaces the movies you mention when adjusted for inflation.

Amazing theatre and presentation, sitting in the middle of a parking lot. I saw Star Wars opening day, first show here and the line was all around the entire (not small) building. Every other time after that when I was in there, it was mostly empty. 900 seats is a lot to keep filled.

Oh what a time – and place! This became a babysitting facility for my younger brother and I (ages 9 and 11) that late summer of ‘77. We had to stay with our just-divorced dad for one of those summer months and we just hated having to be there with his new wife and baby (I’m sure she hated it, too). At any rate, this theater was right down the hill, and we’d sit through 1½ showings of 'Star Wars’ each session (we’d start mid-way about the Cantina scene). Oh, and it was not ‘Episode 4’ nor ‘A New Hope’ yet. I think we managed a total of 12 or 14 viewings that summer! One way or the other, it cost our dad, plus the concession stuff! Note: it also could have been the following summer of ‘78, as I believe 'Star Wars’ ran there for over a year.