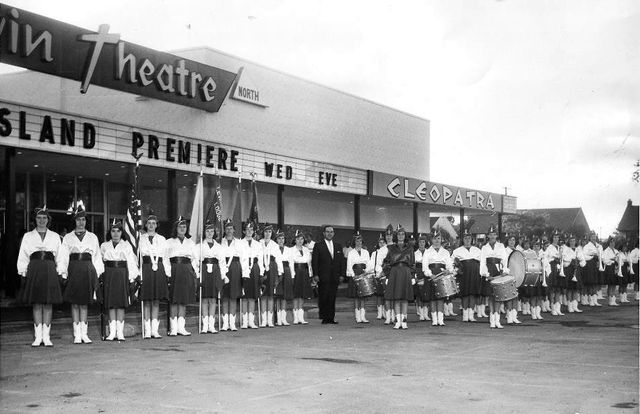 Opened by Town and Country Theatres on May 27, 1964 with Elizabeth Taylor in “Cleopatra” in the Twin North Theatre. This 2,000-seat cinema was located in the Mid-Island Plaza Mall in Hicksville, NY. It was later taken over by Fox Eastern Theatres. A 1968 advertisement shows the South Theatre playing “2001: A Space Odyssey” in 70mm Cinerama exclusively on Long Island. In 1973 it was taken over by Mann Theatres. From December 21, 1984 this theatre was chopped up into six screens by an independant owner. It closed when it was announced Redstone was opening a new multi-plex in the new Hicksville Mall and was afterward demolished and replaced by an IKEA store.

This theater had to have been one of the earliest twin theaters built in the United States. Boxoffice of December 9, 1963, said that ground had been broken for the 2000-seat twin theater being built by Town & Country Theatres at the Mid-Island Shopping Plaza in Hicksville. An earlier item in the issue of October 14 had said that the architect for the project was Leon Miller.

So far I’ve been unable to find any Boxoffice items about the opening, but the Twin Theatre was in operation by spring of 1965, when it was the site of a wedding arranged as part of a promotion for the movie “Marriage Italian Style.” Boxoffice of April 5 has a photo of the happy couple with part of the theater visible in the background.

It probably would be more accurate to say that this theater was one of the earliest built at the beginning of the multiplex boom of the 1960s. There’s a chapter in the Cinema Treasures book about the evolution of purpose-built, multi-auditorium movie theaters. The Duplex, in Detroit, which had two side-by-side auditoriums, opened in 1919, and there are other early examples cited.

<<< So far I’ve been unable to find any Boxoffice items about the opening, but the Twin Theatre was in operation by spring of 1965 >>>

Joe:
When Bill Kallay and I worked on 70mm in New York we learned “Cleopatra” played at this theater beginning in May of 1964. I’m not sure if it was the theater’s debut booking, but, whatever the case, the “Cleopatra” info offers evidence the theater was open at least a year before the time-frame you cited.

wasnt this theater shown in the 1980 horror movie “he knows your alone”???

This theatre was built by architect Leon Miller in 1963-4 and operated by him for several years before he sold or leased it to Fox-Eastern Theatres along with some other “Town And Country” theatres he designed and built. The only one he kept to this day is the South Bay Theatre in West Babylon.

P.S. Cleopatra was the inaugural attraction at the Twin North and South Theatres. Mr. Miller told me when I met him two or three years ago. By the way, Leon said “Torn Curtain” opened the South Bay Theatre. His other theatres were the Wantagh and Town theatres on Long Island.

This theatres' name in the heading should be changed to Twin Theatres North & South. The “Fox Plaza” never preceded or was the name of this Twin Theatre. It was never called Fox Plaza North or Fox Plaza South. Note the Cleopatra ad above and you’ll see. It WAS never a Fox Eastern Theatre when it opened, that was only after it was sold to Fox-Eastern. When Mann took over all Fox Eastern Theatres in 1973, they were still known as Mann’s Twin North and Mann’s Twin South. Thanks CT if you correct the error.

This theatre was ran by different chains, Mann Theatres, Cinema 5 and RKO Century. It became independent an open as 6 screens on December 21, 1984.

Please add December 21, 1984 as the date it open a 6 screens. Just uploaded the ad as a sixplex