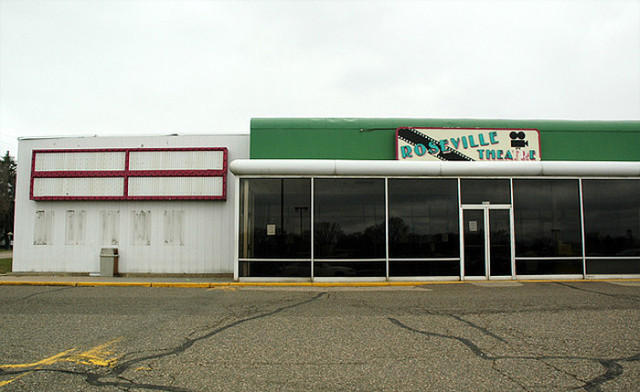 The Roseville 4 opened November 22, 1974 as a first run house. In recent years, it has been screening second-run films at $2 a ticket, with Tuesdays being dollar nights.

The cinema closed at the end of March, 2008. It was torn down to make way for a supermarket.

The Roseville 4 Theater was opened in the mid-seventies by Engler Theaters of Hopkins, MN. The family owned exhibitor begin with the Hopkins Theater in a western suburb of Minneapolis, and later took over and bought several neighborhood theaters in suburban Minneapolis. I think this was their first move into the St. Paul suburban market. The theater was built inside what was previously a large Spartan-Atlantic discount store built across from the St. Paul city limits on Larpenteur Avenue. The discount store was converted into a strip mall. The theater’s decor was almost non-existent. It did have at least one screen that could run 70mm. The most famous thing about this theater was the plush highback reclining seats upholstered in antique white!

A PDF available from the web site of St.Paul architectural firm Vanney Associates lists 25 theater projects designed by Robert F. Vanney, including an undated interior remodeling of a four-screen theater at Roseville, Minnesota. This having been Roseville’s only four-screen house, it must have been this one.

I often went to this movie theater along with my family and friends while growing up in the 90s. Parents took me there to see “The Last Emperor” when I was probably only 7 years old but my earliest memories going there was watching “Aladdin”.

Tickets on Tuesdays were a buck and popcorn was buttery and cheap. They played second run films so if you missed a movie in its first 2-3 weeks of play, you had a chance to see it for a cheaper price.

Quality of the screens weren’t too bad though only one or two had Dolby Surround stereo. The rest were simply mono. Because they played second fun tilms, sometimes the print of the films were often scratchy especially near the end of the reels.

The only time the movie theater had any problems on me was when the projector suddenly turned off during “The Net”. Also, the projectionist sometimes forgot to switch lenses between flat or anamorphic films so I would go out and tell the staff to flip the lens. Good old memories.

This opened on November 22nd, 1974. Grand opening ad in the photo section