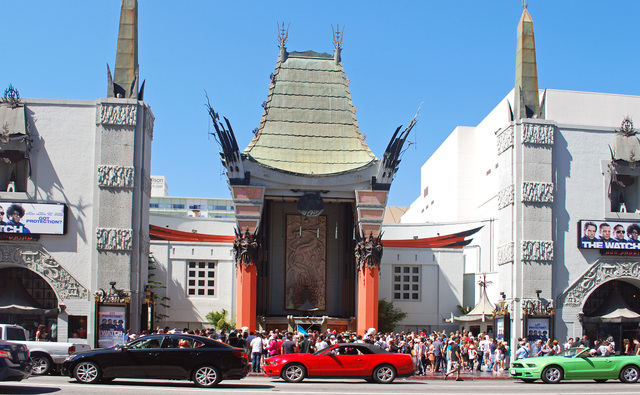 The Chinese Theatre is arguably the most famous movie theatre in the world. It opened as Grauman’s Chinese Theatre on May 18, 1927 with Cecil B. DeMille’s “The King of Kings” starring H.B. Warner and a stage prologue “Glories of the Scripture” which had a cast of 200. Seating was provided for 2,200, all on a single sloping floor (apart from a private box located at the rear, to the left of the projection box overhanging the rear orchestra seating). The theatre was equipped with a Wurlitzer 3 manual 17 ranks theatre organ which was opened by organist Frederick Burr Scholl, and accompanied the 65-piece symphony orchestra conducted by Constantine Bakaleinikoff. The Chinese Theatre has been the site of thousands of movie premieres and the destination of millions of tourists. Scores of celebrities have left their footprints, hand prints and hoof prints on the walkways near and on the theatre’s courtyard.

In 1973, Mann Theatres bought the Chinese Theatre. Two auditoriums, each seating 750, were added next to the Chinese Theatre, turning the theatre into a triplex operation from April 12, 1979. In 2000, the two added auditoriums were razed to make way for the construction of the Kodak Theatre – the new site of the annual Oscar presentations.

In 2001, the original 1927 built Chinese Theatre underwent a renovation to return its exterior to its original design and Mann Theatres, in late-2001, also added an adjoining 6-screen multiplex theatre, designed by the architectural firm Behr Browers Architects of Westlake, CA. Seating capacities in the six new screens are: 459, 177, 177, 177, 177, 279.

In August 2009, Mann Theatres announced they were planning to put the Chinese Theatre up ‘For Sale’, and it was sold to an independent operator in April 2011. In January 2013, the naming rights were sold to television manufacturer Television China Ltd., and it was renamed TCL Chinese Theatre.

The main original auditorium was closed at the end of April 2013. Renovations by the architectural firm Blair Ballard Architects to turn the historic auditorium into a 986-seat IMAX theatre, with a 46 foot tall x 94 foot wide screen were completed on September 15, 2013 when the world premiere of the updated 1939 classic movie “The Wizard of Oz-3D” was screened on the giant IMAX screen.

On November 2, 2021 a vote was passed at a Planning and Management Land Use Committee (PLUM) meeting of the city council to re-zone the TCL Chinese Theatre for high to medium residential use.

What a lucky kid to have such cool parents!

Hi Bill_Lonee, and welcome! Great story! I remember my first viewing of Star Wars, also at the Chinese, and it also changed my life! I remember events in my life as pre- and post-Star Wars!
I hope when theatres reopen eventually that you come back and watch a movie at the Chinese, I go all the time (well, until it has to close) and the theatre is still magic, and in my opinion one of the best places to see a big movie!

That was back when the Chinese had carbon arcs three Norelco’s in the main booth and they could go from 35 to 70 mm on a changeover and it was impressive. To go from a small 1:85 picture for the trailers in mono to a full Todd-AO picture with six channels of a great six channel mix an experience that only comes once in a while

“Movies and Museums Are Coming Back. Should You Go?” asks The New York Times in a controversial article displayed here

Moviegoing as practiced for more than a century appears over. This could be the “new normal.” The following New York Times article does not mention Grauman’s Chinese specifically, but the theatre would be affected if it ever re-opens. Click here

On 11/7/1977 Herbie(The Love Bug) along with other immortals of the silver screen, placed it’s wheel marks in cement outside the Chinese Theatre, before people to watch a screening of the movie, “Herbie goes to Monte Carlo”.

May 2017 Chicago Tribune article with about the 90th anniversary images.

That is so awesome! Thanks for sharing that amazing memory. Unfortunately I was too young to see Star Wars when it was first released, I was three going on four, but I have fond memories of seeing Return of the Jedi during its initial release. (I also missed The Empire Strikes Back when it first came out.)

Passing along the link to a 12-page 40th anniversary RAIDERS OF THE LOST ARK retrospective which features a historian Q&A and 70mm playdate chronology. The Chinese is mentioned several times.