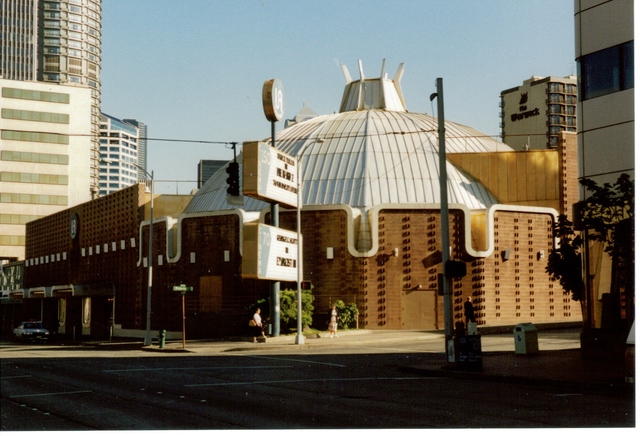 This twin screen theater, which opened in 1969, was originally outfitted with the Dimension 150 process in the main auditorium and mono sound and a flat screen in the Cinema 70 auditorium. The original idea by United artists was that Cinema 150 would show Dimension 150 films and the Cinema 70 would be equipped for 70mm films. In point of fact, the Dimension 150 process used 70mm film but had amazing asymmetrical lenses for the left and right projectors, which were each over 2ft long. The lenses were manufactured by the Kollmorgen Company of Northampton, MA. The UA 150 was well known locally as the main theater that showed "Star Wars" for a year in 1977/78. The interior of the main auditorium was a large wooden framed roof with an equally massive screen.

In the mid-1990’s it was a second run house that had revival screenings on weekend midnights. UA let the theater get very run down and ultimately closed the doors in 1998.

The theater was demolished in 2002 and the only thing remaining was the marquee (which has now also gone). An apartment complex is now on the site. “It’s a shame Paul Allen couldn’t have also saved this theater and restored it to it’s glory. Ironically it was just a few blocks from the restored Cinerama”.

I (like emmyathome) also worked at this great theater in heydey of the early 80’s. I remember Mr Shonk and Nick(asst mgr). Memories of this theater come to mind while I’m watching “Sounder” on TCM, saw this movie w/my 6th grade class at the UA 150, I remember the cozy side balcony seats!

I remember the dramatic striped waterfall curtain covering the huge ultra widescreen. It was alternating pale tan and crimson and went up in a vertical manner. What a dramatic theatre. It made even bad movies likable or somewhat likable. Nothing like it anymore.

I worked here a few times as a fill in projectionist in the early 1980’s. I was the relief projectionist at GCC’s King Cinema located directly across 6th Avenue from the UA. I happened to walk by the site in the early evening on the day they demolished the building. The pile of rubble had that famous “Old Movie Theatre Smell”.

As cited in my retrospective article, the UA Cinema 150 held the longest-running engagement of “The Empire Strikes Back.”

One of many new high rise residential towers now occupies the entire block.

I used to work here as the second run films and then lousy first run films were being played right up to the final couple of Film festivals before it closed as the Cinedome. ( Spike and Mike’s Twisted Animation Film Festival and the Black Film Fetival. ) 1991 or 1992? After that I think it became the UA again. We also ran Star Wars for a week and the place was packed everynight.

Since I had the keys to the place, one of the things I liked to do at night when we finished was explore the place as well. I don’t recall the square part off the dome, but I think that was a machine shop up top for repairing things. The 150 side was a pretty nice 75mm projector and screen that could have given the Cinerama a run for its money. When I was there the 70 side was a pretty sad 35mm theatre that was small and miserable. One night we offered the only two people who showed up to watch a movie on that side dinner and tickets to come back another night so we could clean it up and go home early.

I also recall that there was a gantry between the 70 and 150 projection booths so the projectionist could take a short stroll to keep them both running. Ray the projectionist said that the 70mm projector was pretty great and that there was only one other like it left in London. No idea of the truth to that. I do have a few 70mm frames of 2001 and West Side Story, but I managed to lose my one frame of Star Wars sadly.

A shame that the place was torn down and not saved.