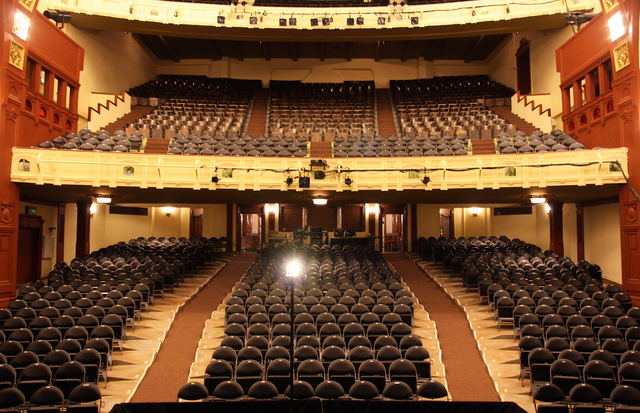 The Moore Theatre opened on December 28, 1907 and was designed by architect Edwin W. Houghton, with an original seating capacity of 2,212. It was a live theatre, and in 1917 it was operated by the Orpheum Circuit, becoming the 4th theatre in the city to be operated by that circuit. The backstage area today is one of only a few theatres in the USA which has hemp lines, where the scenery is hauled by ropes.

In December 1975 it became an art house movie theatre and was renamed Moore Egyptian Theatre. It has since gone back to live theatre use.

The Moore was located on Second Avenue, at the corner of Virginia Street It was the first theatre built on Second Ave. Others quickly followed, and eventually became known as “Theatre Row”, I believe.
The Moore Theatre operated under that name as mostly for live shows: vaudeville, etc. In 1974 it was placed on the National Register of Historic Places. In 1975, it was rented to a pair of entrepreneurs, who changed the name to the “Moore-Egyptian Theatre” They lost their lease in 1980, and the name reverted back to the “Moore Theatre”.

It has never been known as the “President”, which was built much later in late 1926 or 1927 by Paramount Studios.

And, the STG page on the President Theatre: http://stgpresents.org/paramount/

It was Seattle’s first Orpheum Theatre, at 3rd and Madison, that was renamed the President Theatre, probably in 1927 when the new Orpheum at 5th and Stewart was opened. The first Orpheum isn’t listed at Cinema Treasures yet. I’ve been meaning to submit it for quite a while, but I keep misplacing my notes about it.

It should be pointed out that, whatever their segregational function in the United States, in traditional and standard theatre design up until the 1930’s, balconies usually had a separate entrance from the main part of the theatre and loge. Even the opera house at Covent Garden in London had a side entrance for the balcony (i.e. “cheap-seats”) up until the renovation in the late ‘90’s. Balcony entrances kept the hoi polloi away from the wealthier patrons, not just blacks away from whites.

My father heard the pianist Artur Rubenstein in concert in the Moore Theatre in 1946. We still have the program. Dad was in Seattle with the Coast Guard just prior to his discharge, and sat in the upper-balcony, lower right hand side. He says it was one of the most memorable concerts he ever heard, and he can still see it in front of him when he closes his eyes.

The Moore was designed and functioned as a “legitimate” or live theatre and had only a brief life as a cinema. It has some of the finest acoustics on the west coast. Much of the interior construction features heavy plaster. The auditorium is considerably deeper than San Francisco’s Geary Theatre, which also has two balconies. Many actors had hoped the Seattle Rep might restore it rather than build a new home at Seattle Center.

The Moore is owned by the Seattle Theatre Group, the same group that owns the Paramount and the Neptune.

Anyone interested in a historic restoration of the beautiful old Moore Theater should check in the space under the 2nd balcony. When I worked at this theater in the early 1970’s, there were plaster casts of the original box seats (and lots of them) stored in that space. Hopefully they are still there and will be discovered once again. The Moore could really glow if some effort shown.

I worked as a projectionist at the Moore Egyptian from late 1975 into 1979. I have written about the Moore. It is in the book From the Arthouse to the Grindhouse. My essay is titled Art and Grind in Seattle.

I have added a photo from WW1 era shows my Great Aunt Birdie, second from right, with friends, at the door of the Moore Theatre, Orpheum Vaudeville. I suspect this is the Seattle Theatre in this discussion. Birdie and family lived in Vancouver BC and had close relatives in Seattle. How does one add a photo to the discussion?