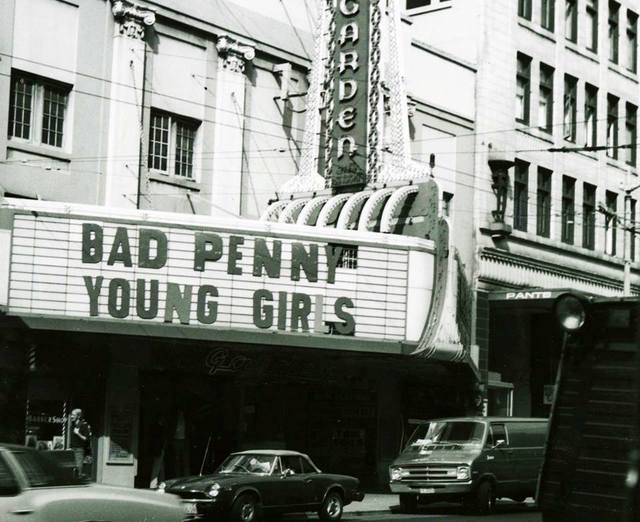 The Winter Garden was closed in the 1980’s. The building was gutted, leaving nothing to note that the theater had been there shortly thereafter. A clothing store occupies the space. The fabulous neon and incandescent vertical sign was last seen rotting in a field north of town in the early 1990’s

Here is a page about the Winter Garden Theatre, full of information dug up by the City of Seattle’s Department of Neighborhoods for their historic buildings inventory.

They name the architect of record for the Winter Garden as Frank H. Fowler, but indicate that B. Marcus Priteca, for whom Fowler may have once worked, “…appears to have had some limited role in this project.”

The section of the page devoted to describing the original appearance of the theatre includes this line:

“A very elaborate electrified 520 sq. ft steel and glass marquee and a monumental, vertically-hung neon and bulb-light sign for the ‘Winter Garden’ were part of the original design.”

This contradicts the claim above, and at the PSTOS Winter Garden page, that the house opened under the name Progressive Theatre. Elsewhere on the Department of Neighborhoods' page it does say that the stock company which financed the project was originally called the Progressive Company, before its name was changed to Winter Garden Company. I’m not sure which (if either) of the websites has the story right. It seems possible that the theatre’s organ was ordered under the company’s original name, and this name would have been on the Wurlitzer company records from which PSTOS probably got the information.

Puzzling, indeed. However, the Department of Neighborhoods site does give the theatre’s opening date as December 3, 1920, more than an month after the organ’s installation. That would have been sufficient time for the name to have been changed. Maybe there’s someone around who has access to Seattle city directories from the era, or newspaper ads for the theatre, and could look up both names to see which was used when?

I did also find this 2003 article from the Seattle Times which also gives Winter Garden as the opening name. Newspaper articles about things that happened decades earlier than their publication date are not always reliable, but this particular article was by Paul Dorpat, a writer who had been doing a “Seattle now and then” feature since 1982. He might be a reliable source.

Unfortunately the most recent photo with a confirmed date I can find of the Winter Garden is the one from 1932 on the PSTOS page. The night shot just below it looks earlier (note the five-globed streetlight standards, as opposed to the three-light standards in the 1932 shot), but that photo has no other clues as to its date.

The Department of Neighborhoods page doesn’t specifically cite a source for their claim that the big Winter Garden vertical sign was part of the original plans. Neither does PSTOS cite a specific source for the information about the organist playing at the Progressive Theatre in 1927, but there’s The Silent Era’s page which cites Film Daily’s 1926 Yearbook (published in 1925) as listing the theatre as the Winter Garden. One or the other must be wrong.

And, for what it’s worth, the Seattle Historic Resources Survey appears to be doing pretty good research, even if much of the work is being done by volunteers. Some of the photos could be better, though.

As of June 14, this former theater is vacant and available for lease. Given the incredible construction boom in downtown Seattle that is presently underway, I don’t doubt that it will be demolished in the not too distant future to make way for yet another high rise.