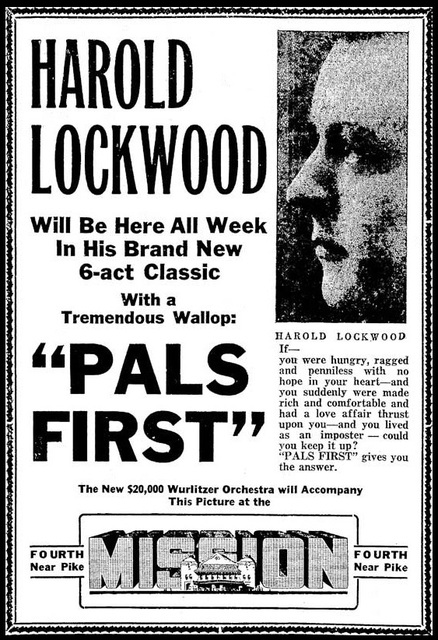 Located on 4th Avenue between Pike Street and Union Street, the Mission Theatre opened on April 29, 1914.

The July 4, 1914, issue of Electrical Review and Western Electrician featured an article about the Mission Theatre and its unique lighting system (the Google Books scan is askew, and the second page is partly unreadable.) There are photos showing the Mission style facade, the projection booth, and the auditorium with its unusual artificial skylight effect.

In 1916, the first Mission Theatre was being operated by Jensen & Von Herberg. A January 16 article in The Moving Picture World about the opening of the chain’s new Coliseum Theatre noted that they also operated the Alhambra and Liberty Theatres.

The Mission Theatre had a very brief run. An item in the December 20, 1919, issue of Domestic Engineering reported that the theater had been leased to a Chinese syndicate who planned to convert the building into a large cafe.

Mike Rivest’s list has this theater operating from 1914 to 1952, but I think he conflated it with the second Mission Theatre, in the Georgetown district, which opened in 1924.

I found only the one listing, giving Fourth Avenue as the location.

A comment by David Jeffers on this web page gives the address of the Mission Theatre as 1412-14 Fourth Avenue.