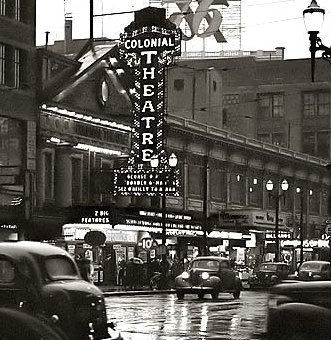 The Colonial Theatre opened in 1913 in what is now the heart of downtown Seattle. It had a Kimball organ. “The Tiger Lily” was shown on opening night.

Seattle theater king John Danz bought the Colonial Theatre in 1917 or 1918. A new Wurlitzer organ was added around that time.

As far as I can find, this theatre thrived until the early-1960’s.

The ad shown at this link — View link — says the theater had “1,000 seats all on one floor” when it opened.

According to a photo caption on this page, the classical Greek Revival facade of the Colonial Theatre was still intact as late as 1981. By 2001, the location was occupied by a Borders book store. The caption does not say whether the building was replaced or merely remodeled.

The Colonial was actually open into the late 1960’s or early 70’s. I don’t have an exact date of closure, but I would have been about 11 or 12 at the time and I remember seeing the theater listed in the Sterling Theaters ad.

“Arrowsmith” with Ronald Coleman and Helen Hayes was released in the U.S. on December 26, 1931. ;p

THEATER BOMBING BAFFLES SEATTLE Police Investigate Mysterious Blast Which Rocks City’s Business Area. (May 12, 1928) — (A.P.)— A theater bombing which left as clue only a sheet iron stage door riddled with scrap iron slugs and the conflicting stories of a half dozen witnesses turned into a mystery today to police who were investigating. The bomb, manufactured with a motion picture film can and dynamite and loaded with rusty scrap iron, exploded in the alley between the Colonial and Capitol theaters here last night while both show houses were filled. It was the sixth theater bombing here since the first of the year. The detonation, which shattered windows in the alley and rocked the business district, alarmed theatre visitors and crowds in adjacent streets and caused a near panic in the audience of the Colonial theater. This house was the apparent object of the bombers. The only arrest made since the inception of the bombing campaign, was that of Thomas J. Woodhouse, a former amateur boxing champion who was taken April 23, charged with the bombing of the Embassy theater and released in $4,000 bail. Labor disputes were given by the police and owners of the theaters as reasons for the bombings.

Link to color night time shot of the Colonial. Vertical neon of the Orpheum Theater can be seen at the far right:

The film “Forever Amber” was released in 1947. It looks like the admission price was 50 cents at the Colonial.

I added the color night time shot to the Photos section, in case the link goes dead.
The second film on the marquee “Sword Of The Avenger” was released in June `48.