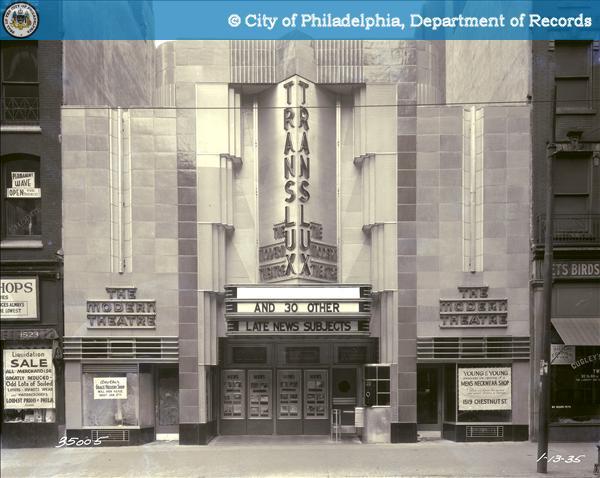 The Trans-Lux Theatre opened on December 31, 1934, as a newsreel theatre. Thomas Lamb designed the theatre in an Art Deco style. It had 500 seats, and for the first time in Philadelphia, rear projection from behind the screen.

Newsreels and short subjects declined with the advent of television, so the Trans-Lux Theatre became a first run movie house, starting with a reserved seat engagement of “The Red Shoes” on December 25, 1948. Disney’s “Cinderella” was showcased in 1950. Jose Ferrer, the star of “Moulin Rouge”, appeared in person in 1953 at the preview showing of that movie. Due to the needs of CinemaScope movies, projection was moved to the theatre’s rear in early-1955. Cary Grant and Philadelphia’s own Grace Kelly appeared in person August 2, 1955, for the gala benefit world premiere of “To Catch a Thief”. Movies shown included Peter Seller’s comedy “The Mouse the Roared”(1959) and Stanley Kubrick’s “Lolita”(1962).

The theatre closed from March 8 to March 17, 1965, for refurbishing to the plans of architect Drew Eberson. The front was remodeled in Italian marble and a new outside box office. New lobby furniture and new light fixtures were installed. Red carpet was added. The walls were covered with white and gold fabric. The ceiling was given a blue and white star effect. The Road Show presentation of “Those Magnificent Men in Their Flying Machines or How I Flew from London to Paris in 25 hours 11 minutes”(1965) was here.

The Sameric Corp. acquired the theatre and renamed it Eric’s Place Theatre. In 1970, Philadelphia theatre architect William H. Lee, a year before his death, remodeled the theatre. The exterior was given a 1970’s Art Deco Revival look, though simple in comparison to the exquisite original facade. “Star Wars” played here for almost six months in 1977.

Eric’s Place Theatre closed in 1993 and was vacant until 2006, when it reopened as a shoe store, Finish Line, which departed this location in 2016.

Howard – MY comment in June 2005 mentions that the first time I patronized this theatre was during the roadshow engagement of “Magnificent Men.” I was disappointed in the screen size as it was the smallest screen I had ever seen in a movie theatre especially for a “roadshow presentation.” The traverse rod curtains actually opened and passed in front of the exit doors on either side of the screen to disappear into the wall coverings. HOwever, as I said the screen, which was located between the two exit doors, had to be one of the tiniest movie theatre screens. I would be interested to know exactly what size it was. Granted the theatre was not that big either, but it was still a disappointment after viewing movies at the Boyd, Stanley, Goldman, Fox, Midtown, etc. I would venture to say that even some of the multiplex screen sizes today are bigger than this one was. – Dennis -Lancaster.

I worked at most of the SamEric movies from 1974 – 1986, thru high school, Temple and part time after college. Eric’s Place, D&D, Mark 1 (under the Holiday Inn on Market Street), Rittenhouse 1&2 and the SamEric. From what I was told the Duke was named after John Wayne (friend of Sam Shipiro) and Duchess after the dog. Eric’s Place was named after Mert’s son who committed suicide. There was a big mural at Eric’s Place and the center piece was John Wayne in cowboyoutfit showing a young boy (Eric) his sidearm. I was the asst mgr ar Eric’S Place when Star War’s played there for 6 months and then moved to the Mark I for another 6 months.

Robert Ford, an employee, posted this (at Friends of the Boyd Facebook page) – Eric’s Place. 1978. We premiered the Buddy Holly story. Gary Busey was there. I don’t recall if there were other celebrities there. I wasn’t sure who Busey was at the time. One of the guys pointed him out to me as he descended the steps from the upstairs lounge. This was a special preview that night..very cool! I remember thinking, with the clothes and the hairstyle, that he appeared to be someone that could have went to school with. I was stationed inside the theatre (usher) and got to see most of the movie! Loved it!! Went to the record store that next payday and got the soundtrack album which I still have and play occasionally. (it’s still in great condition).

If memory serves, two of the producers of the film, a married couple named Bauer, lived outside Philadelphia, this explains why Gary Busey was there.

The building will become “Hoops” a store by Foot locker. The Eric’s place marquee has been exposed for now: https://flic.kr/p/HBSwEo

This opened on December 20th, 1974 along with the Eric on the Campus, Eric Montgomeryville Twin, and the Leo Twin. Its grand opening ad can be found in the photo section.

I came across this in MOTION PICTURE HERALD March 15, 1941 about news reel theaters in Philly. I was surprised to see it mentioned the Karlton as a second-run house.

In Philadelphia, there are two center-city theatres dedicated to the newsreel. The 493-seat Translux, operated by the Translux Movie Corporation, and managed by Harry Jordon, opened in January, 1935. Hourly programs are presented with the admission “always 25 cents” (plus tax), from 10:30 A.M. to 11:30 P.M. daily, 10 A.M. to 12 midnight on Saturday and 2 P.M. to 12 midnight on Sunday.

Four newsreels are edited to form a half-hour review and four shorts complete the program. Newsreels are changed twice weekly and shorts once a week.

The editing of the newsreel follows a regular pattern, first emphasizing foreign news, then local, national defense and sports. Since the advent of the European war, news shots of the conflict have taken prominence. However, according to the management, in recent weeks, not much has been coming through to satisfy the patrons. First pictures of a battle or invasion are advertised by one-sheets in front of the house. Blow-ups are used for regular advertising. When war newsreel pictures are unusual special attention is given, as the pictures of the incendiary bombing of London were sold as “The Burning of London.”

The other Philadelphia newsreel house is the News Theatre, operated by William Goldman Theatres, Inc., independent circuit. Seating 385, the house was first opened in 1937 with a policy similar to that of the Translux, offering shorts and edited newsreels. The following year, the house experimented by featuring a revival instead of the short subject. This proved so successful that it was adopted as a regular policy. As a result, the News offers a two-hour program, changed weekly, of a feature picture revival and a 25-minute giant newsreel, edited from all five newsreels. The house is open from 10 A.M. to 11:30 P.M. weekdays, 10 A.M. to 12 midnight on Saturday and 2 P.M. to 12 on Sunday, charging 15 cents until 6 P.M. and 25 cents (plus tax) in the evening.

War news is the chief newsreel attraction, according to the management, but interest is equally keen when there is some item of special importance. Moreover, during the football season news shots of the principal games are as popular as war happenings.

In January Warner Brothers gave special attention to the newsreel at two of its second run houses in the downtown area, the Karlton and the Palace. A 25-minute digest from the five newsreels is presented and advertising follows the headlines of the day.

This is where I saw Star Wars for the first time in 1977 with my Aunt. I didn’t even know much about it going in. I just saw the Storm Trooper movie photo hanging in Fat Jacks Comic Book Store on 20th St. & ran right over to view the next showing. What an awesome day.