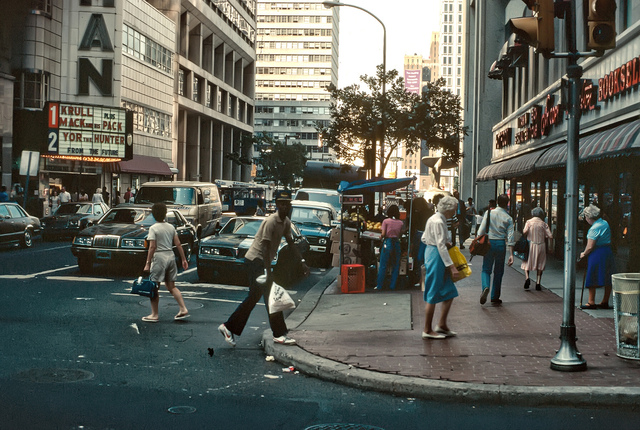 Opened in 1946 with the world premiere of “Monsieur Beaucaire” starring Bob Hope. Designed by architect David Supowitz, with William H. Lee associate architect, the 1,300-seat Goldman Theatre was designed in late-Streamline Moderne style which included a large vertical sign which was flush with the facade and continued above the roofline as a tower, with the name “Goldman” in huge letters. Originally the theatre had a rather small semi-circular marquee, which was later replaced by a larger triangular-shaped one. A screening room for the film industry was located upstairs.

The world premiere of the Civil War drama “Tap Roots” was hosted in July 1948, with the film’s stars attending. The stars and Universal officials stayed at the Ritz Carlton, where visitors received ‘campaign buttons’ like those worn at the national political conventions taking place that summer in Philadelphia. These buttons proclaimed ‘I’m a delegate to the premiere of “Tap Roots” at the Goldman Theatre’.

Actor Peter Lawford appeared in person at the theatre on October 26, 1949 at screenings of the film “The Red Danube”. The world premiere of the film noir “Wicked Woman” was hosted at the Goldman Theatre on January 20, 1954 with a personal appearance by actress Beverly Michaels. Kirk Douglas appeared in person at the Goldman Theatre for the March 15, 1955 world premiere of the western “Man Without a Star”.

Local theatre chain Budco acquired the theatre in 1972. The Goldman Theatre ended its life as a single theatre September 3, 1974 with the 10:35 showing of “The Education of Sonny Carlson”, double-billed with a reissue of “Lady Sings the Blues”. The twinned theatre reopened October 2, 1974 with “The Longest Yard”, a first run, and a reissue of “Cabaret” which had previously showcased in the then single auditorium. The two 600 seat auditoriums, each had a 30 feet wide screen. The theatre continued to show movies until 1984 when it was razed and replaced by an office building.

Contributed by Bryan, Howard B Haas
Get Movie Tickets & Showtimes

To whom it may concern, Planet of the Apes opened at the Goldman on April 24, 1968, and not one day earlier! Advertisements in both the Philadelphia Inquirer and the Evening Bulletin indicate clearly state that Apes opened as the incoming feature of an “All Day Prevue” (a Philadelphia exhibition protocol in which the incoming feature is paired with the outgoing film to produce a double-feature billing for one day) with “The Secret War of Harry Frigg” as the outgoing film. The Variety magazine issue of May 1, 1968, in the “film grosses” section also states without reservation that the first week of “Apes” at the Goldman ended and was tracked by Variety on April 30. It grossed $47,000, btw. I’ve posted photos.

Hopefully this “Planet of the Apes”/Goldman opening date incident will serve as a lesson for those naive or irresponsible enough to rely on the IMDb for such information.

Coate, the information IMDb supplied was right. The person posting failed to note that April 3 was the United States release date for “Planet”, which was clearly stated by IMDb, and not necessarily the date it began its run at any particular location. Without further research to confirm, it was a stretch to assume it opened at the Goldman on that date and post that misinformation. I’m surprised that person has not acknowledged their mistake and apologized, as they expect others to do.

walterk…. The IMDb info on “Planet of the Apes” is NOT correct (or, at the very least, lacks context). The fact is “Apes” opened in at least two U.S. markets in the February/March ‘68 period. And while my research shows the film did open in at least a few markets during the week of April 3rd, most “keys” opened it after April 3rd. And, of course, the second- and third-tier markets opened it even later than that. And yes it would be nice if the person in question would chime back in and acknowledge the mistake, especially since they were dismissive of my correction claim.

There was no “deeply curved” screen at the Goldman, but a very large flat screen. Add Todd-AO version of The Agony and the Ecstasy, Half A Sixpence (35mm mono). The Longest Day was presented in CinemaScope (b&w 35mm 4-track). I saw all the movies from Spartacus onward.

SethLewis should have seen the Goldman in the 1960s – a wide angle auditorium with a great view of the large screen. Very clean & well-maintained, the best projection and sound. Other large, great theaters with reserved seat 70mm movies: Boyd, Stanley, Midtown, Randolph (after Cinerama renovation) and Cinema 19 (former Viking).

What happened in the 1970s as Center City deteriorated was VERY SAD.

John, the opening of Disney’s 70mm “Sleeping Beauty” in the Spring of 1958 introduced the Goldman’s new post-scope screen on a deeply curved track which remained in place at least through the run of “Porgy and Bess” the next year and quite possibly as late as “El Cid” in 1962. This was the 2nd 70mm install in the area, the first of course being the 1955 introduction of the Todd-AO system at Goldman’s Midtown. And both installations were originally on curved screens which subsequently were replaced by flat projection.

Also, thanks, John, as to your comments re particular films here and on the Prince (Midtown) and Stanley pages. In the next week or so, I will revise the Introductions as to significant changes. Would welcome a post at Cinema 19 page, too, from you.

On opening, this theatre was the subject of an article in Marquee, titled “Philadelphia’s First Post-War First-Run Theatre Features a New Idea in Acoustic Technique – THE GOLDMAN THEATRE.”

Alas, the link is to a Google Books entry providing a “Snippet View” only; however, I am able to view the following text:

“The effects are obtained by applying to the walls 1,190 panels fabricated from convex wood-and-metal squares, 3 feet on a side…”