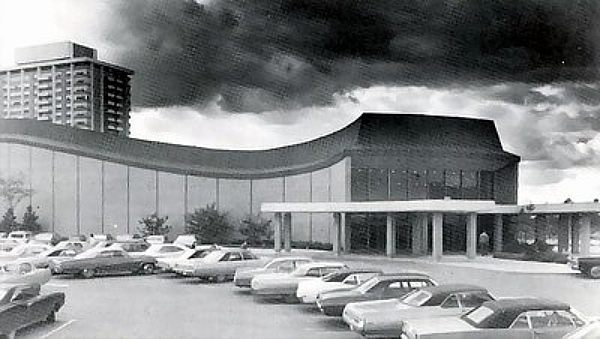 The Americana Theatre opened June 18, 1967, for Nicholas George, designed by Samson Associates, and seating around 1,750 in its ultra-modern auditorium. Its vast screen, 30' by 60' was one of the largest ever seen in Michigan before the era of Imax theaters. The Americana Theatre’s opening-night film was Otto Preminger’s “Hurry Sundown”.

The Americana Theatre quickly became known as a roadshow house, with 70mm projection equipment, along with the nearby Northland Theatre, though the Northland Theatre originally ended up screening superior films than the Americana Theatre in those first few years. Early roadshows included “Finian’s Rainbow” (1968), “Song of Norway” (1970) and “Bedknobs and Broomsticks” (1970).

Two additional auditoriums, each seating 760, were added on in early-1972, and designed by noted theater architect Louis Wiltse. Later the same year, a fourth, similarly-sized auditorium was added by Wiltse, and the theatre became known as the Americana I, II, III, IV.

During the mid-1970-s to early-1980-s, the Americana I, II, III & IV was best known for its highly successful runs of blockbuster films like the original “Star Wars” and “Indiana Jones” trilogies, especially in its large main auditorium, which became one of the only ones in the area after the Northland Theatre was twinned in the mid-1970’s.

In 1986, Nicholas George sold the Americana to AMC Theatres, just months after three more screens were added. Within a couple years of AMC taking over the Americana, the number of screens had been increased to eight, but the original large auditorium had not been divided – yet.

When crime began to rise during the late-1980’s at the theatre, including a set of shootings, the chain took the unusual step of adding metal detectors.

AMC spent $2.5 million remodeling the Americana in 1990, which finally included the gutting of the original auditorium, and loss of its huge screen, carving the space into five more smallish screens. The theatre also lost its original name as well, becoming the AMC Southfield City 12 on August 3, 1990.

In 2001, AMC closed the aging multiplex down, unable to compete with the nearby even larger, flashier and cutting-edge Star Theatres Southfield 20. The former Americana was demolished not long after it was closed to make way for new devolopment.

It’s true that the Americana was well-known for it’s run of the “Star Wars” movies, but it was the Northland Theater that ran the first two Indiana Jones films. “Indiana Jones and the Last Crusade”, however, was shown first-run at the AMC Americana.

I remember seeing Toy Story at the Southfield City in 1997 when I was 13 with a friend of mine while our moms went to go see Waiting to Exhale. Toy Story played in the former large theatre which was split into 2 separate theaters. I remember the Metal detectors there, and the large gatherings of High-School aged teenagers hanging out before the 7 and 8 PM shows started and people at the bus stop waiting for the Greenfield bus to go to Northland.

“I saw the movie "Tommy” there. That was when Dolby stereo first came out.“ (brian74)

“Tommy” was released in a variety of sound formats, including an early version of Dolby Stereo. Dolby Stereo was installed at the Americana in May 1977 for “Star Wars.” The theater upgraded to a 70mm six-track Dolby Stereo presentation of “Star Wars” in November 1977. In December ‘77, they began their 70mm run “Close Encounters Of The Third Kind” at which time the exclusive Detroit area 70mm showing of “Star Wars” moved to the Northland.

The Americana was among the theatres included in the original limited-market launch of “Star Wars.” The Americana’s 5/25/77 opening-day gross, as reported in Daily Variety, was a house record $11,532.

The Southfield City was also near my house, and I remember my mom really not letting me go up there when I was a kid because of the metal detectors and wild behavior of the kids up there.

I remember seeing Tommy here too. Was the first movie they charged $4. The theater was so packed we had to sit in the 1st few rows.

I also worked as an usher at this theater in 1978-79. I started when “The Wiz” was playing. They often showed premieres of new movies with local celebrities attending. We literally rolled out the red carpet and the ushers wore white gloves. We had jackets with braids on the shoulder signifying our role (white for ticket takers/doormen and the coveted gold braid for head usher – which I was when I left)

Was a great job compared to dishwashing (my first job) and got to see every movie there for free for 2 yrs.