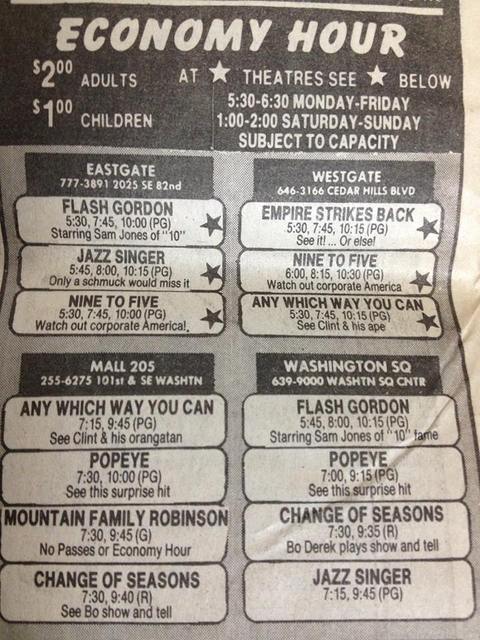 DavyDuck’s post of 8/21/07 was interesting. Something didn’t quite seem right, though, so this prompted me to go dig out some notes and newspaper ad photocopies. What I conclude is that the passage of time plays so many tricks on one’s memory!

<<< *We were to open “Close Encounters of the Third Kind” exclusive in Portland in the [Westgate’s] big auditorium – huge double-page ads were placed, and a line of about 1000 people were outside waiting for the first show – but the print had not arrived! * >>>

While it’s true that Columbia had booked “Close Encounters” at the Westgate (and even sued 20th Century-Fox and Luxury Theatres to try to get them to end their “Star Wars” run), ultimately, “CE3K” played crosstown at the Eastgate and a simultaneous booking at Moyer’s Town Center (no Cinema Treasures page created).

<<< *The problem: to hold onto Star Wars, it was contracted to play in the big auditorium, and moving it to a smaller theatre (even though it was only drawing small crowds) would violate the contract and end the run – and 20th Century Fox badly wanted our print back and to pull “Star Wars” from exhibition. * >>>

“Star Wars” couldn’t have been playing to that small a crowd because just a month earlier had upgraded to a 70mm print which increased their grosses. The film during its run consistently week after week exceeded the contract’s holdover amount, a clause that resulted in Columbia losing their lawsuit and allowing “Star Wars” to stay put at Westgate.

<<< Moments before opening the doors, the staff had to tell the crowd that the film would actually open across town at the Eastgate – and the crowd trashed the lobby. >>>

How would so many people have known to line up at Westgate when the newspaper ads from the day before and morning of the first day did not list Westgate as the theater scheduled to play the film??? Perhaps some of the confusion stems from the opening day ad claiming “CE3K” was playing at Rose Moyer?

It’s unclear to me from the ads I have if the film played at Rose Moyer for any part of its run. By the film’s second week the ad confusion appears to have been cleared up and the film was promoted as playing simultaneously at both Eastgate and Town Center.

Not true! “Star Wars” stayed put at Westgate and, in fact, played there all the way through autumn of 1978, a U.S. record of 76 weeks. And the reason it played there for so long, including nine weeks after all other prints in the country were pulled, is due in large part to the “CE3K” lawsuit.

Good history on the theatre,,,.

I’d love to see photos of the inside of the theater back then, especially when Star Wars was there.

Back in the late 70s and early 80s, my brother and I used to take Tri-Met in to Beaverton to see movies at the Westgate because it was the nicest one in the area. At that time it was only three auditoriums — one large one to the right, and two smaller ones to the left. Later they renovated it and divided the large auditorium into three, for a total of five screens.

Responding to javert; the inside of the Westgate back in the 1970s was pretty awful. The colors were oranges and earth tones, as I remember them. There were these huge chandeliers in the lobby. They were made from several orange plastic globes hanging down on wires at different heights. They were covered with that sparkly stuff they used to put on things. The globes were not solid, more like they were made with strips of plastic molded together kind of randomly, so there were holes through them in places. In the 80s or 90s when they split the large auditorium up into smaller ones, they remodeled and took all that out. I google a bunch of things trying to find an image of something similar, but I could not find anything close.

I was looking at the grand opening ad someone posted, and I noticed it clearly states there were two auditoriums. In the 1970s and early 1980s there were three; two on the left, and one big one on the right. At some point the one on the left must have been a single larger one.

I also saw “Chariots of Fire” at the Westgate. It was a great big-screen experience. That cool electronic music sounded really good cranked up loud in the biggest theater in the area.

As cited in my recent retrospective article, “A Force to be Reckoned With”, the Westgate held the longest-running engagement of the original “Star Wars.”

Here’s the link to a new podcast which focuses on the Westgate and its long run of the original “Star Wars.”