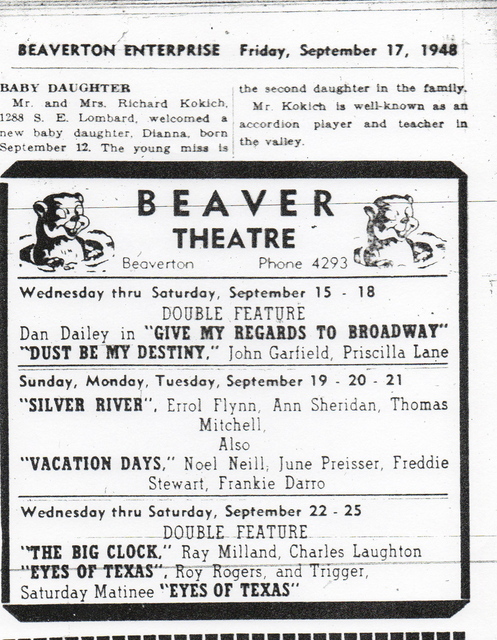 The Ritz Theater is listed in Film Daily Yearbook editions for 1941 and 1943. It had been renamed Beaver Theatre by 1950. Last known briefly as the Film Fair.

The former Ritz Theater is now a bakery.

In 1945, the Ritz was bought by Robert J. Mattecheck and Harold Gunness. The new owners planned to remodel the house, according to the December 15, 1945, issue of Boxoffice.

Then the December 10, 1949, issue of Boxoffice said that R.J. Mattecheck and Harold Gunness were selling the Beaver Theatre at Beaverton to Harold Fix.

There are a few more items mentioning the Beaver in the 1950s, and then nothing for a long time. As early as 1953, the owner was named as J.J. Taggart.

Finally, the September 16, 1968, issue of Boxoffice says that Jay and Joy Taggart had reopened the former Beaver Theatre as an art house called the Film Fair. This is the only mention of the Film Fair I’ve found, so I don’t know of it was successful or not. In any case, if the Ritz and the Beaver were the same house, and there were no later name changes, Film Fair was the last name for the theater.

The last article I mentioned contains these entertaining lines, by the way: “In remodeling the Beaver Theatre here, he decided on an ‘adults only’ policy because of the difficulty in operation. With a general picture policy the small Beaver had become a ‘baby sitting’ operation.” (cue Butthead laugh: huhhuhhuh huhhuhhuh.)

The Beaver Theatre might make a better name for an adult house.

Here is a link to a picture of the Ritz/Beaver theater:

I wasn’t around when this was open, though with the theater marquee at the bakery I figured it was once a theater.

Why doesn’t this site have anything on the Beaverton Drive-in? It was on Merlo and 158th, where the Tri-Met Merlo Garage is.
Or the Paramount, for that matter. I used to watch Blazer games on the big screen with my buddies.

retrorussell, This site generally will list theaters by the last name the operated under. The Portland Paramount can be found under Arlene Schnitzer Concert Hall, and the Beaverton Drive-in is probably listed as the Canyon Drive in. That said, this listing for the Beaver should really be listed as the Film Fair.

Thanks chspringer, on the info.
The Beaverton Drive in was not the Canyon. The Beaverton Drive in was on Merlo Road and 158th. It’s now the Merlo Garage. I’m also looking for info on the Milwaukee-area theater the Teleview or Televue (long defunct), and according to a friend of my dad’s there was a theater on Barbur “many moons ago” (as old people say). Wonder where I can get info on those..

The theater on Barbur operated for only a few years. It was built on the hill side, so when you entered you were at balcony level and had to go down stairs to the main level. Unfortunately the way the building was built it did not meet fire codes for the exits and eventually the fire department made them shut down. The building was demolished shortly thereafter. I don’t remember the exact name of the theater.

Yeah, I think it was by where 1st Stop Video was, in the same plaza. By where “Manana’s” used to be (I miss that restaurant; good, cheap food).

Retrorussell is correct, the Beaverton drive in and canyon drive in sometimes are confused for one another because they were both in the same city. Canyon had 1 screen, Beaverton had 4, both in Beaverton.