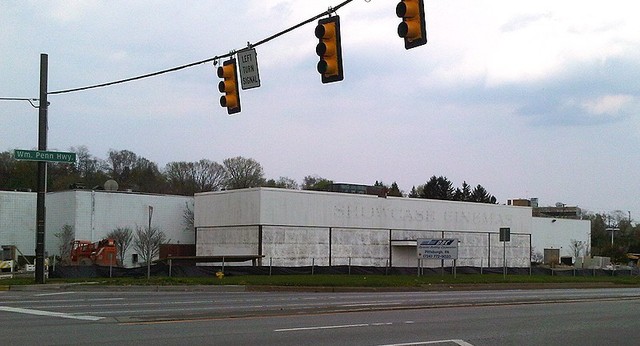 This theater opened as a state-of-the-art quad on June 30, 1976. The opening day titles were “Silent Movie”, “The Outlaw Josey Wales”, “Great Scout and Cathouse Thursday”, and “W.C. Fields and Me”. All of the theaters were twinned and two more theaters were added during the 1980’s, bringing the total number of screens to ten.

For over two decades, this was the top-grossing moviehouse in the Pittsburgh area; however, in 2000 Destinta and Loews opened new, larger complexes nearby that caused Showcase’s business to decline for years and on September 12, 2004 Showcase East went out of business. It was demolished in late-2010.

“Star Wars” ran 42 weeks here during its original 1977-78 release, which I imagine is the long-run record for the theater. A Dolby sound system was installed for the engagement, one of four in the Redstone/National Amusements circuit to do so.

(For the Pittsburgh market, “Star Wars” ran a longer period of time – 59 weeks – at the downtown Bank Cinema I & II, though it didn’t open there until July 20, 1977, whereas Showcase Cinemas began theirs several weeks earlier on May 25.)

Demolished about a year ago. Now the site of a Sheetz, a regional convenience gas station, a hotel & a small strip mall.

This theatre was the only theatre in the area to show the controversial Santa slasher flick ‘Silent Night, Deadly Night’ back in 1982. The theatre reported numerous walkouts, as well as complaints and phone calls from concerned parents. This cinema had the movie playing on 3 screens. TriStar pulled the movie out of all cinemas after only two weeks of release, due to irate protests/picket lines and a huge dropoff in it’s 2nd weekend box office.

“Silent Night, Deadly Night” opened on Nov. 9, 1984 on one screen each at Showcase East, North and West and at three Cinemettes – Eastland, Fulton Mini and Village. The Cinemettes pulled it on Nov. 21 but the Showcases carried it through Nov. 29. Then it spent another week at Bellevue, Hampton, Hollywood and Penn Hills for a total of four weeks in the Pittsburgh area. It was doing better business than than the other Tri-Star Christmas ‘84 releases – “Supergirl”, “Runaway” and “Breakin’ 2: Electric Boogaloo”.

What really put this theatre on the map was they were the only theatre in Pittsburgh to play the original “Star Wars” movie in 1977 on a big screen. The Bank Cinema downtown later played this as well, but those theatres were smaller than the Showcase. The original Showcase had two big auditoriums and two small ones. I can recall going there in the summer of 1977 to see “Star Wars”. I remember standing in line for that movie for a long time, only to hear an usher come outside with a bull-horn and say “Single Seats Only”! I learned to come back earlier the next time.

The biggest problem this theatre had was the immediate area it was located. I spoke to a former employee of the Showcase West Cinema who told me the residents in the Wilkins Township area fought Showcase East “tooth and nail”. They prevented any further expansion of the original structure, so Redstone (the parent company) had to split the exisitng two big auditoriums into two in order to add more screens. Also, this theatre later lost money because the owners had to give the people who lived around it “lifetime” passes, to keep them happy. This perk was apparently taken advantage of too often.

Was the far-left theater quartered?

Yes, the far-left theater was quartered when they wanted to add more screens.

There were MANY issues with the structure itself which ultimately led to it’s closing. The lobby roof was falling apart, every AC unit was ancient and in need of replacement, the entire building needed new carpeting, the area of the building that held screens 1-4 was slowly sinking, the main sewage pipe below the building had ruptured which led to backup in every bathroom and concession stand, hundreds of seats needed replaced, frequent issues with the thx and dolby equipment on screens 7 and 8, most of the projection equipment was late 70s vintage with modifications made along the way, the parking lot was a giant sinkhole waiting to happen, the sidewalks were buckling, etc.. Each of these issues combined with low attendance after the Loews Waterfront and Destinta theaters opened made it a little difficult to convince National Amusements to do anything but close this location. The original construction plans for the shopping center now in it’s former location included the old building….but I guarantee once they got a look at lack of sewage pipe and condition of the structure itself…it had to come down. (Also… I worked there from 2000 – 2004 when the building closed)

Technically…. The final date may have been in Sept, but we worked in that building through November of 2004.

One item that is slightly incorrect is the expansion of the building being prevented. The original building only extended to the location of screen 8. Screens 9 and 10 along with a few offices were added on after the building first opened. I believe screens 1 and 2 were divided at that time to become screens 1-4. screen 3 became screens 5-6 and screen 4 became 7-8. Even when split, screens 5-8 (originally 3 and 4) held 500+ each. The original projector portals were still in the projection booth at their original locations, just covered or painted over. It was also evident on the second floor where the original staircase to the projection booth and manager’s office was located before the renovation.

What is true however are the lifetime passes. Every single Wilkins Twp resident who lived on the street behind the theater had free admission. The free pass sheet was normally pretty light on weekdays and through the weekends we’d occasionally get into multiple pages of people using passes for admission.

Another bit of trivia… there was a locker on the second floor that held Star Wars posters, standees and other promo materials from the original run of each movie until about a year before the building closed. It was interesting to see. There was actually an entire room at one point with a giant Paramount logo on the wall that was completely loaded with old movie promo materials until we cleaned it out around 2003.