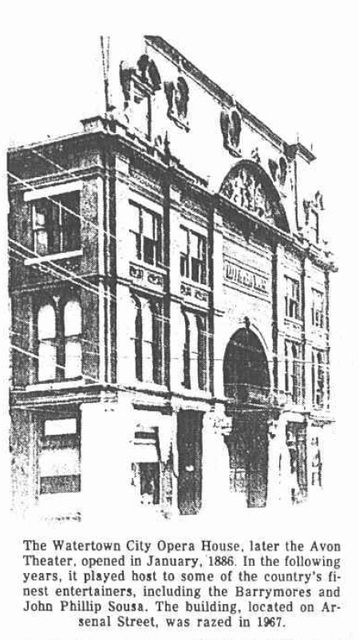 Formerly the City Opera House which was opened January 4, 1886. It was screening movies by 1914. It was remodeled and reopened July 8, 1920 as the Avon Theatre. It later became part of the Schine Circuit. The theatre was damaged in a fire in July 1935, but was repaired. The Avon Theatre was closed and demolished in 1967.

According to a website on theaters in the area this theatre opened in 1920 and closed in 1964.

The City Opera House at Watertown is on a list of theaters designed by Leon H. Lempert & Son that was published in the 1906-1907 edition of the Cahn guide.

This web page has an early postcard of the City Opera House, a three-story brick building with a fourth floor mansard in the style popular when it was built around 1885.

This PDF file has scans of what appear to be photocopies of drawings, plans, and photos of, and text about, the City Opera House, taken from various period sources.

Information about the house in the file includes the fact that it opened on January 4, 1886; that the architect of the building was John W. Griffin, of Watertown; and that the auditorium and stage sets were designed by Leon H. Lempert, who is credited as a “Scenic Designer.” In 1884, Lempert had received a patent on a design for auditorium floors that greatly improved sight lines over previous designs, which is illustrated in the file.

This web page, which is where I found the PDF, has extensive information about early theaters in Buffalo, along with a section about Leon H. Lempert & Son. There are links to quite a few other PDFs which I haven’t examined yet.

Although Lempert had designed several auditoriums prior to 1885, it wasn’t until that year that he founded his own architectural firm. Lempert, Jr. joined the firm in 1891. Lempert, Sr. semi-retired in 1906, and died in 1909. The Avon should be attributed to Leon H. Lempert, Sr.

A December 17, 1921, article in Exhibitors Trade Review indicates that by that time the Avon Theatre was being operated by the Empsall family, who were owners of an eponymous department store in Watertown. The Empsalls had been interested in acquiring the three theaters operated at Watertown by Papayanakos Brothers, but the brothers sold their houses to the Robbins Amusement Company of Utica instead.

An article about Watertown’s theaters in the July 3, 1976, issue of the local Daily Times (PDF here) said that The Opera House was extensively remodeled in 1920 and reopened as the Avon Theatre on July 8 that year.

Vaudeville and stock companies continued as mainstays of the theater for many years, but the last vaudeville show appeared in 1932. Occasional concerts and other live performances were presented after that, but the house was primarily a movie theater until it was closed and demolished in the spring of 1967.