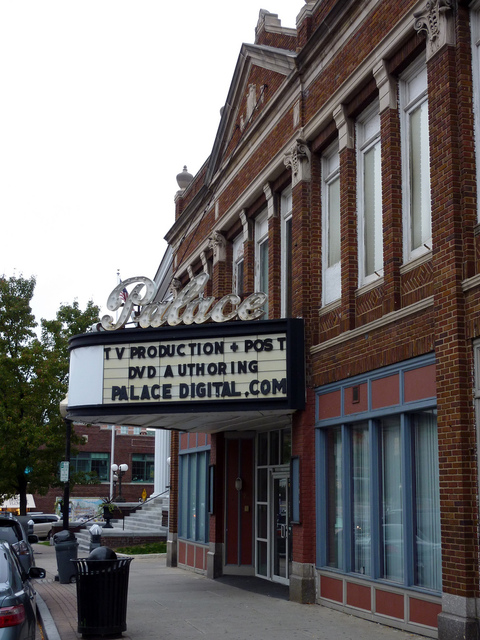 The popular movie house closed August 28, 1966 and remained dormant until 1975 when Russell Fratto purchased the building with plans for revitalizing it into The Palace Performing Arts Center.

The building for a few years served as an adult movie house called the Mayfair.

Fratto had founded the Ballet Etudes Academy in 1950 and was looking for a theater for his ballet repertory company.

Rehabilitation work was begun on restoring the auditorium and later, the lobby and foyer were remodeled. A second story became offices and a dance studio.

In 1980-81, The Palace Performing Arts Center presented a mini-season of live ballet, magic, ragtime and opera.

In 1982, with the downturn in the economy and cut backs in funding programs that reduced contributions to the arts nationwide, Fratto terminated programming at the theater.

The theater faced bankruptcy and the wrecking ball.

In 1983 the spaced was leased to The Palace Production Center which invested over $100,000 to remodel the space with completely new electrical, heating, and air conditioning systems.

In 1985 The Palace Production Center exercised an option to purchase the old theater and became the latest owners and heirs to the historic Palace Theater.

The theater was then used for readings and rehearsals. It was preparing to undergo restoration work to restore the Palace Theater back to its grand luster. But this was not to be, and the building began use as a production recording studio.

I went there the other day to see if I could get a tour and it’s incredibly easy! The lady who took me on the tour was really cool and very personable. It’s owned by Palace Digital which does lots of productions and film stuff and they filmed post-production of the Tour De France on the actual stage. The Chamber of Commerce is also inside. The company invested over $10 million in the building and all the offices in the former wings in front have drop ceilings as well as the whole floor. When you walk in, there’s the old chandelier and awards and old Palace photographs on the walls. The welcome desk is in the center.

She took me to the basement where there are labs and she took me to the old balcony which is no longer there. The wall behind the stage is there but beautified with the projection booth above, used as an office. The brick is still exposed and there’s a catwalk just above shoulder’s length stretching the length of the room with rooms.

She took me to the other end to see the proscenium and stage and it’s quite dilapidated. I asked her if they applied to grants and if they sought to invest in repairing the room and they weren’t. There were nets hanging from the ceiling to prevent from falling plaster. The stage was nice and was used for many live telecasts and productions. Stagehouse is cool too. Old boxes hanging near the stage (forgot the term) are still there. Track speed nearby for trains on the Danbury branch are 10mph and they go right by the theater, so that shouldn’t be too bad for falling plaster. However, the main tracks are at 55-70mph but there are further away.

Also known as the Roodner Theatre. Listed as this in the 1914 City Directory showing vaudeville and moving pictures. Changes to the Palace in 1915.

Corrections from above. Back to the stage, the balcony is intact as are the two round and decorative boxes at either end. There’s a wall about 10 feet in from the front of the balcony that goes to the ceiling because there are offices in there.

I was here again as were 100 others. The CT Film Fest was showing movies last Friday to Sunday across the street at the Sono Regent 8 (Bow Tie Cinemas) in theatre 3. The Palace Digital Studios held a benefit at sliding scale for the Make-a-Wish Foundation of CT and it was very nice. Everything was black and food was plentiful.

The Palace closed permanently as a cinema on August 28th, 1966, “for lack of business,” according to a report in The New York Times on the following day. In recent years, the Palace “catered mainly to a Spanish-speaking clientele,” the NYT claimed, without going into detail.

My grandfather, Leon Britton, married to Bertha Britton and living in Norwalk, CT at 4 Obrien St, was the music director for the Palace during its vaudeville and silent movie heyday, and he played the piano scores by Charlie Chaplin for Chaplin’s movies, plus any other scores handed to him for the vaudeville acts, of course. It is my understanding that he also played one of the “Great Wurlitzer Organs” that was installed there, but I don’t know of that for certain. He met all the greats. The South Norwalk Palace was near the train station, and every weekend hordes of critics from the various newspapers would arrive from NYC to review the acts whose next stop would be the Palace Theater in Manhattan. I never met him, for unfortunately he died before I was born from Tuberculous brought about from weakness to his lungs coming from exposure to mustard gas during WWI. I certainly wish I had more than vague stories to go by! Those must have been exciting times!

Website for current tenant Media Benders, with a link at the bottom to donate to help save the Palace Theater.