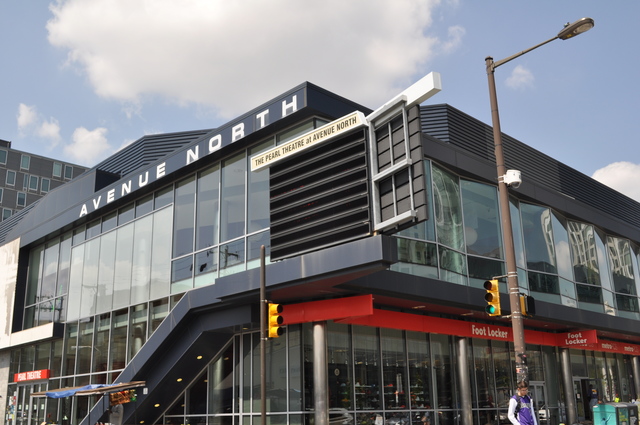 The Pearl Theatre at Avenue North opened December 5, 2006, at the campus of Temple University, next to the Cecil B. Moore stop of the N. Broad Street subway.

It was named after the former Pearl Theatre on Ridge Avenue, and in memory of entertainer Pearl Bailey. Several eateries and retail shops also opened in the new Avenue North retail and housing complex that the Pearl is part of. In 2002, a new 14-screen Magic Johnson megaplex was planned at this site, but that plan fell through.

A huge electronic billboard outside lists the movies playing. From the ground floor box office, patrons use stairs or escalators to go upstairs to the second floor. A concession stand leads to a hallway which has slanted ceilings and columns. The hallway’s original décor was grey, including the patterned carpet, but on January 5, 2008, the hallway was repainted orange to give it a brighter, more festive look. The auditoriums enter from the hallway.

Each auditorium is stadium seated with luxury high back rocker seats of grey fabric and cupholders on the armrests. The side walls have black circular sconces on the black fabric on the upper section towards the ceiling, and red fabric on the lower section. All auditoriums have digital surround sound.

I enjoyed the movie I saw this past weekend. Thankfully, still no stupid preshow commercials/ads, etc.

Tonight, there was a sneak preview of “Transformers” sequel, filmed in Philadelphia:
View link

Let’s emphasize how hideous those two giant electronic billboards are! Give them to SEPTA. They seem to like those things. Give the Pearl Theatre a classic marquee with chase lights!

Uh—Oh?! The link that TheaterBluff references by Inga Saffron about the all new Pearl Theater @ Avenue North (http://www.philly.com/mld/inquirer/16386709.htm)is no longer available on philly.com. As so often happens, comments on Cinema Treasures often outlive the links that are referenced. When this occurs, the link portion of the comment should be deleted by the author.

Out of date links are ok to keep here because people can search for those news links once they have the basic info. Inquirer articles can be located whether in their archives online or Philadelphia Free Library online or in person at libraries.

Well Howard, I guess they’re okay to keep if you have the time to search the archives. For many people, it’s simply a waste of time!

As of September 2, 2016 the Pearl Theatre at Avenue North will become AMC North Broad Street 7 Theatre