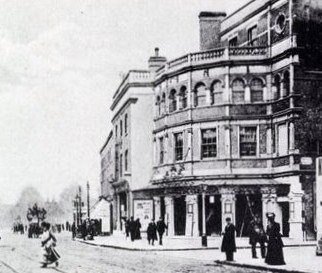 Located in the southeast London inner-city district of Camberwell, on Denmark Hill on the corner of Orpheus Street, close to the Metropole Theatre (later New Empire Theatre). The Oriental Palace of Varieties opened in 1896 and was so successful that a new theatre was built on the site in 1899. This was named the Camberwell Palace and it had a seating capacity of 1,553 (stalls, 665, balcony, 400, gallery, 456 and 36 in box seats). Standing room was provided which gave a total capacity of the building as 2,117.

It was owned by music hall star Dan Leno and Herbert Campbell and was designed by noted theatre architect Ernest A.E. Woodrow. The proscenium was 30 feet wide and 20 feet high and it was equipped with nine dressing rooms and two chorus rooms. The stage was 28 feet deep. In 1902, a lion tamer was mauled to death on stage.

Films formed part of the variety bill in the early 1900’s and variety continued for many years. In September 1932, it was taken over by Associated British Cinemas (ABC) who equipped the theatre with a Western Electric sound system and it became a full time cinema, known as the Palace Cinema. For this use the seating capacity was reduced to 1,396. ABC built and opened their new Regal Cinema on Camberwell Road in 1940, and they disposed of the Palace Cinema to an independent operator. It was taken over by the the Hyams Brothers under their subsidiary Loughborough Playhouses Ltd. in 1940, and they operated it until 18th April 1943 when it closed as a cinema.

It re-opened under new management on 26th April 1943 as a live variety theatre, and reverted to its original name, Camberwell Palace Theatre. From the beginning of 1948 until at least mid-1953, it was the home of the Court Players, a repertory theatre group. Then another repertory group, the Under Thirty Group took over until 1954. The Palace Theatre then went over to staging ‘girlie’ shows, and the theatre hit the headlines when 19 year old Peaches Page broke the law by moving whilst in the nude, as a mouse came on stage while she posed. She was sacked and the Palace Theatre was closed soon after on 28th April 1956, when the last production staged was “French Design” another ‘girlie show’. It was demolished later in 1956. In 2009, a post office stands on the site of the entrance.