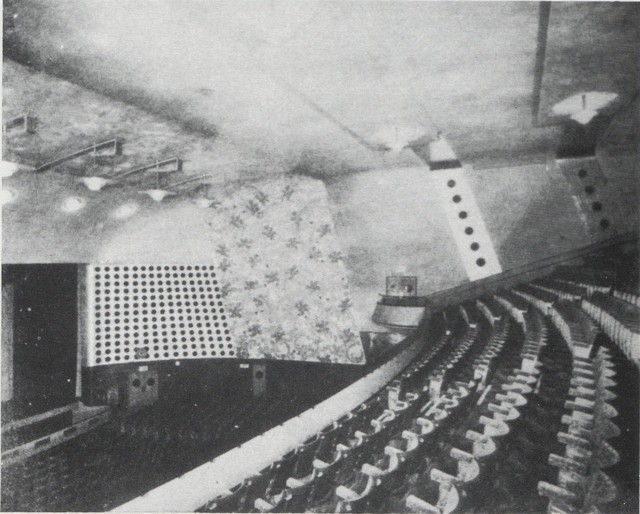 Located in the south London district of Camberwell. The Odeon Theatre was built on the site of the Camberwell Empire Theatre, later the New Empire Cinema. It was designed by Andrew Mather, assisted by Keith P. Roberts for Oscar Deutsch’s Odeon Theatres Ltd. and was the largest Odeon built in London (the fourth largest built for the circuit). It opened on 20th March 1939 with Fred MacMurray in “Men With Wings”.

Where the New Empire Cinema had its entrance on the apex of the corner of Denmark Hill and Coldharbour Lane, the new building had seven shop units located. The Odeon was designed with two matching entrances on both roads. Each had a square fin tower that were clad in light yellow vitrolite tiles and carried the ‘Odeon’ name.

Inside the large auditorium were 1,484 seats in the stalls and 986 seats in the circle. The decoration was quite plain with a honeycomb pattern of vents on the splay walls beside the proscenium and a painted band across from the side walls over the ceiling. Lighting was via fittings suspended from the ceiling.

The Odeon suffered some minor bomb damage on several occassions during 1944, but things were quickly patched up. In its last years of operation, only the circle was in use and the entrance on Denmark Hill was closed off. The end came suddenly on 5th July 1975 with Dirk Bogarde in “The Night Porter”.

It stood empty for six years until 24th January 1981 when it became a Dickie Dirts emporium selling jeans at greatly reduced prices. This was only a brief respite, as the business folded and the building sat decaying for another ten years, often occupied by squatters. In spring 1993 it was demolished and a block of flats for homeless young people called ‘The Foyer’ was built on the site.

Another exterior photo of the Odeon as Dickie Dirts here:–

I’m looking for first hand accounts of seeing The Night Porter at this theater in connection with film history research I am engaged in. Anyone with memories of The Night Porter, however vague, please feel free to get in touch with me. .co.uk

Champlin-I have my own portfolio of every movie 1965 to 1995:adverts,press reviews,photos from TV Times even.Some films loads of stuff;other very little if independently released. Will have an up-to-date bibliography though, maybe an ad from the London Evening Standard with the Odeon,Camberwell listed amongst all the others-don’t know until I get into the vault where the collection is stored at a library different part of Birmingham. Maybe tomorrow(Monday 30th) more likely end of the week however.

Smoothie… Much obliged to you. Look forward to hearing back. No rush.

Lost Memory; your photo might be a version of Ken Roe’s posting on Dec 31 2006(above) but we may never know as that link seems to have been diconnected. In any event your photo records a presentation of Dad’s Army which had its premiere at the Columbia,Shaftesbury Avenue on March 15,1971 and its subsequent South London release on April 11. Unless there was a later re-run at the Odeon Camberwell can we suggest around those two dates maybe?

Can be seen in the background of 1951 film Pool of London. The scene is about 1 hour in.