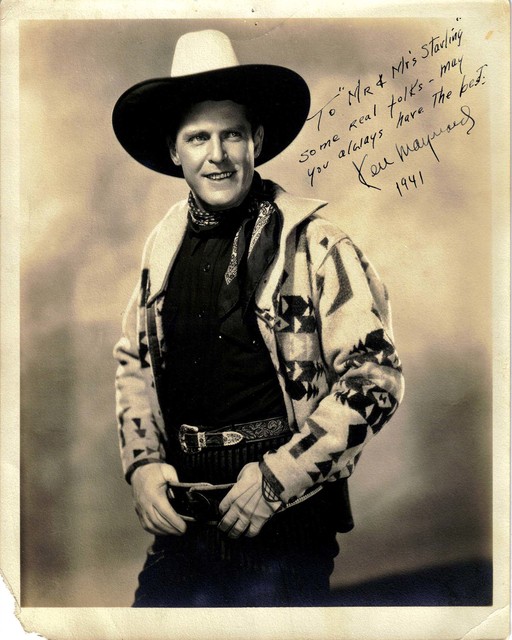 Autographed photo to Roy starling and his wife from Ken Maynard. Maynard enjoyed a long and prosperous career with Monogram/Allied Artists that began with silent films. He died in 1974.
www.flickr.com/photos/lastpictureshow/349617399

Group photo of unidentified men holding a “Greater Monogram Pictures” banner. The man in the front row holding the right corner of the banner may possilby have been Roy Starling.
With thanks to Jeannette Davison for permission to post these photos.
www.flickr.com/photos/lastpictureshow/346693449

At the time of his death Roy Starling owned the WHITE THEATER in Fort Worth, which later became the BERRY. He had sold the WINGS and TEXAN theaters in Grand Prairie to buy the White.

See my comment on the Texan Theatre at
/theaters/18144/
I describe a theatre across the street from it which might have been the Wings.

Boxoffice of July 3, 1943, said that Roy V. Starling’s new Wings Theatre had opened the previous Saturday night. The theater was in a converted store building, though Boxoffice said the building was “practically new” at the time.

Boxoffice of March 22, 1965, said that the Wings Theatre had been condemned by the city, and that the owners intended to demolish the building and erect a new theater on the same site. I’ve been unable to discover from Boxoffice if the new theater was ever built.