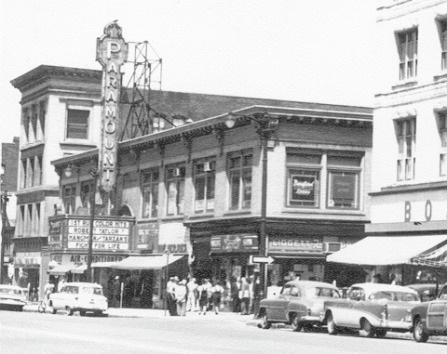 (Posted by Francis Rogers, a former projectionist who posted this comment on the Mohawk Theatre page)

The 1866-built Empire Theatre was destroyed by fire in 1912. It was rebuilt and had 1,467 seats and was designed as a full stage theatre. There was an orchestra pit for a 25-member orchestra, dressing rooms on each side of a full stage (three rooms up and three down on each side), foot light pockets, complete stage rigging and a huge lighting control board full of original knife switches. It had motorized red velvet curtains over the screen along with a white “traveller” between the two. The booth had an operational carbon arc follow spot that was used for holiday parties. Later renamed Paramount Theatre. The theatre was demolished in the 1970’s. The lobby can still be seen if one looks carefully for it; it now houses a restaurant.

Prizes, raffles, and tons of cartoons were all on the program. It was the first theatre that I was lucky enough to gain entry into the projection booth so I could begin learning what would become a life long passion.

As the Paramount, this theatre was included in the MGM Theatre Photograph and Report project. There is an exterior photo dated May 1941. The theatre had a narrow entrance in a business building with stores on each side. There was a boxy marquee with “Paramount” in script letters on the front. The attraction is “Men of Boys Town.” The Report states that the Paramount is on Main St. in North Adams; it has been a MGM customer for over 10 years and is over 15 years old. The condition is Good, and the seating listed is Orchestra: 859, Balcony: 448, total: 1,307 seats. Competing theatres are the Mohawk and the Richmond. The Paramount is listed in the theatre directory in the 1942-43 Motion Picture Almanac; it was under control of Nathan Goldstein’s Western Massachusetts Theatres, a Paramount affiliate.

In August 1929, the North Adams Evening Transcript announced that Publix Theater Corp. had taken over the Empire, and that the name change to Paramount would be effective September 2.

A publication of the North Adams Historical Society says that the Empire Theatre was built in 1912 to replace an earlier theater dating from 1966 that had burned down.

In my previous comment, that should of course be a construction year of 1866, not 1966, for the theater that burned in 1912 (unless we have one of those rare, time-traveling theaters on our hands.)

The Empire is listed in the 1927 Film Daily Yearbook as having 1250 seats and open 6 days per week.

The Empire was one of three theaters listed at North Adams in the 1914-1915 American Motion Picture Directory. The other two were called the Bijou and the Wilson.

This web page has a history of the theaters in North Adams, and says that the Empire Theatre as rebuilt following the fire of 1912 incorporated three walls that survived from the original Empire that had opened in 1902. It also says that the Paramount, like the nearby Richmond Theatre, was demolished in the 1970s for the city’s redevelopment project.

Also lost was a ghost house that would have been called the Capitol Theatre had it ever opened. It was built in the 1920s by the Sullivan brothers, who then controlled all the theaters in North Adams, and it was used as the headquarters for their real estate business. It had been designed for quick outfitting as a theater in case any rival theater company attempted to build a new house in their territory. By the time the E. M. Loew’s chain announced plans for the Mohawk Theatre in 1937, the Sullivans had retired from the theater business, and the threat to open the Capitol was never carried out by Western Massachusetts Theatres, which had taken over the Sullivan properties.