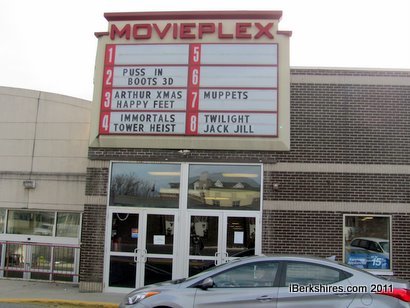 The North Adams Movieplex 8 is located in the Steeple City Plaza, in part of a former K-Mart store divided up for retail. This theater was a Cinema North Corporation theater until 2009.

It is now under an independent operator.

The chain for this theater is Cinema North Corporation. I goofed on that when I submitted the entry, sorry.

The cinema, closed since October when Cinema North went out of business, reopened today as the North Adams Garden Movie Plex 8. Their website is http://www.northadams8.com

By the way, this theatre was never known as the North Adams Cinema 6. That was a different building elsewhere in town.

True, Roger, this theater was never named “North Adams Cinema 6”. But they are basically one and the same – Cinema North simply moved to this location and expanded operations.

The North Adams Cinema 6 was on Curran Highway, in a strip mall building that was shut down by the Board Of Health who evicted the tenants and condemned the buildings. Those tenants include the cinema, Gringo’s Restaurant, a yarn outlet, and a few other small local businesses. But I digress.

Too bad about Cinema North. But I’m glad to hear the theater will get another shot.

Saw Despicable Me here in 3D back in August, when I was in town with a friend. 3D ticket was cheap because they use the cheapest version of 3D(MasterImage 3D). This was the first showing of the day(12:15PM on a Sunday), and the theater was not cleaned from the night before. Other than that, no complaints, nice place, and the price is right.