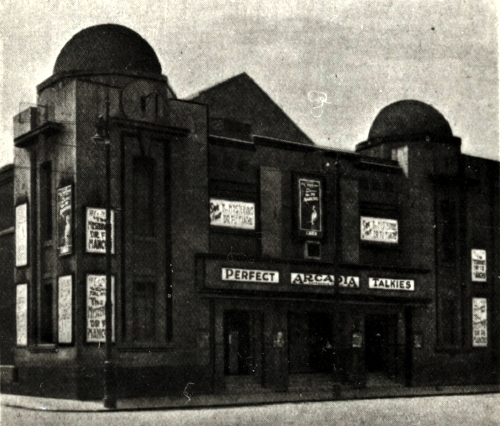 Opened 31 Dec 1930 by Associated British Cinemas(ABC), the Arcadia Picture House was located on the corner of Canning Street and London Road. The building was quite plain, both externally and internally, the facade had twin towers, topped with rounded domes at each side.

In 1939 it was purchased from ABC by independent exhibitor Harry Winocour. It was closed in August 1953 after part of the ceiling collapsed. Purchased by the James Green circuit in 1954, repairs were undertaken and it re-opened.

Closed on 2nd April 1962, it became a Mecca Bingo Club. This was closed due to a road widening scheme in 1971, and it was demolished almost immediately.

This cinema had 1409 seats when it opened.

Closed as cinema on 2 Apr 1962 and became a bingo hall until it was demolished.

The photo you are showing is not the Arcadia cinema, its The Olympia cinema The Arcadia was demolished 1971 The Olympia has been demolished but the facade has been retained and is going to be a library, office space and a boxing club among other uses

I have only seen one photo of the Arcadia in all the years I have been interested in cinemas, its not a great shot but I can send it to you I have no idea who took the photo